Photo: Carol Diehl (2014)
***
Note:  I lifted this mission statement from Creative Time’s Wikipedia entry, well aware that it is not same statement that appears on their website. However having been Director of Public Relations (a somewhat hilarious title, given that I was the entire department) for Creative Time in the mid-80’s, when it was a pioneering organization and very true to its nonprofit status, these were the words I used to promote it and feel best represent the inspired vision of founder Anita Contini.

Kara Walker: My Complement, My Enemy, My Oppressor, My Love closed at the Whitney Museum in New York on February 3rd. It can be seen at the Hammer Museum in Los Angeles from March 2nd to June 8th.

Following are notes from a conversation I had while surveying the exhibition at the Whitney with J.P., a friend who I used to perform with at the Nuyorican Poets Cafe, a black poet who makes a point of going beyond racial content in her work. As you'll see, the conversation is often contradictory and comes to no conclusion, but is presented here simply as fuel for discussion, which may be the biggest contribution of the exhibition itself.

C.D. & J.P.: Everything is, like the subject, black and white: the images, the message. There’s no subtlety.

J.P.: Is it possible that her early success made it difficult for her work to change and grow? The American culture reflects arrested adolescence. It’s the way an adolescent would view sexuality.

C.D.: It reminds me of the pictures of penises the boys in junior high used to draw on their desks.

J.P.: It appears she’s coming out of her own psychic distress. If her intent is to provoke, then she succeeds.

C.D.: But to what end? What are we supposed to do with the feelings she stirs up? Does she change anything?

J.P.: She signifies blackness to the audience who is seeing “the other.” In that way it reinforces the separation. On the other hand, she’s witnessing, testifying, bringing out what’s hidden. It’s compelling on a visual level, moves like a narrative. And she succeeds in throwing us back to that time, that moment. The figures are the same size as our bodies,

C.D.: Our shadows make us cutouts as well. We’re part of the piece.

J.P.: We’re the inheritors of these crimes. And we’re creating our own equally brutal history, with what we’re doing to the Iraqis, and to nature. And in art…look at Damien Hirst and his shark at the Met. Here’s a being that swam, lived, and worked—a creature greater than all of Damien Hirst’s parts, and one that’s not allowed peace in his death. Damien is like the devil, and his last name should be “hurts” rather than Hirst. The shark has no rights, it’s a commodity.

J.P.: She is a product of this history.

C.D.: In one way or another, we are all the children of slavery. PC art allows people to get off too easily. If you’re black, the message reinforces feelings of victimization—while whites see this show or collect the work and therefore feel absolved of something, the way people in the Roman Catholic Church used to buy indulgences.

J.P.: This is her present experience, but she’s stating the same problem over and over. The most intimate moment is when you see the newspaper pictures of the senators from Mississippi, the white slave owners.

C.D.: They’re the most complex—and the true victims, because their psyches are twisted.

J.P.: Walker achieves something complex even though it feels simple. It works psychologically, and feels claustrophobic.

C.D.: After you spend time with it, the atmosphere is suffusing, suffocating; you can almost feel what it was like to be alive then. In that way it’s more powerful than I expected. However there are no deep or complex issues at work here; it’s simply a matter of the good guys and the bad guys, titillating images no matter who's behind them. I fear that art that relies on stereotype works on base emotions and ultimately only reinforces the differences.

I’m more interested in art that doesn’t borrow energy from sensationalism but has power on its own. We'll know that the art world has overcome its innate sexism and racism when the Whitney, MoMA, or the Guggenheim features a black female artist whose work has nothing to do with gender or race.
_____________
If you saw the exhibition—or even if you didn’t, since a no-show by an art-interested New Yorker is a statement in itself—please post a long or short review as a Comment below.
_____________
Reviews:
Holland Cotter in The New York Times

How many people notice, upon leaving the Kara Walker exhibition at the Whitney, that there's another show equally rooted in racial stereotypes outside? 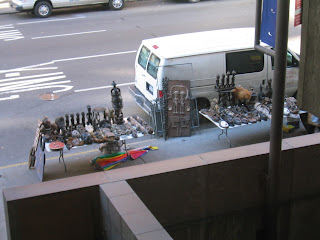