Art Vent House Report #4--Last week I dropped in on Reggie Madison, a longtime friend and painter I admire, who has eked out a home and studios (plural) in a crumbling industrial complex smack on the edge of the Hudson River in the village of Athens, NY. This is one of several industrial spaces he's "Reggified" since I've known him, and patrons of Club Helsinki in Great Barrington, MA, where he designed the interior, will recognize the the style--humorous conglomerations of objects only Reggie would choose, more of which can be found in his shop on Warren Street in Hudson. The building is so close to the water that inside it feels like an ocean liner, especially the living room with its narrow windows: 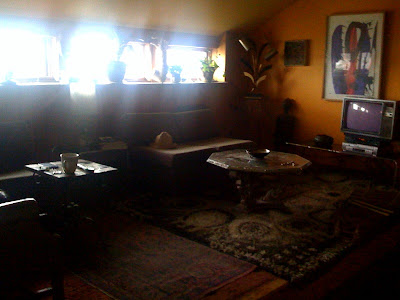 A corner of the bathroom:

And outside, the Hudson, still bleak in early April: