I’ve been writing an end-of-the-year manifesto, which I’ll finish and post as soon as I get “Jingle Bell Rock” out of my head, the result of an untimely visit to Radio Shack. It’s worse than Billy Joel. I’ve finally realized that I was born with a condition, shared by untold others, where I absorbed—and remember indelibly—the words and music to all of the songs to which I was exposed, up to and during adolescence. This is a serious deficit for someone born pre-Beatles and positively treacherous around Christmastime (yes, Mike, I really do know what comes after “ten lords a-leaping,” although I’m not proud of it). Some of my most intimate friends aren’t aware that I, who loathe musical theater, could, if pressed or paid enough, sing all of Oklahoma including the more obscure ditties such as The Farmer and the Cowman can be Friends. This should date me, except when I look on YouTube, I discover that, even in this age of Twilight and Kanye West, high school music teachers are STILL making bewildered-looking students perform this thing. C’mon, guys, get over it! You don’t want to be responsible for any part of the population in 2050 (when everyone really will be wearing silver Lycra tights to work as in Logan’s Run) going around with “The Farmer and the Cowman” in their heads. You don’t!
music
Comments (4)

December 19, 2008
This morning at breakfast, with my houseguests Einar and Manuela, the conversation turned to elections, Nixon, and then Nixon‘s summit meeting with Pompidou in Reykjavik in 1973. At the time Einar and other young Icelandic architects were concerned that the city’s early timber houses were being destroyed in that era’s international craze for “urban renewal,” the excuse being that the buildings were derelict. To demonstrate that their shabbiness was only superficial, Einar and 60 to 80 friends went to work on a row of houses scheduled for demolition, painting facades and replacing windows. It just so happened that soon after, Nixon came to Reykjavik for the summit, and wanted to take a stroll around the city. As they walked down this street of newly pristine houses Nixon said to his host, “I see that you take good care of your traditional architecture here in Iceland”—and after that, of course, there could be no talk of demolishing them. The buildings stand to this day.

When Buckminster Fuller visited Reykjavik two years later, Einar told him this story. “I’m happy to know this,” Bucky said, “because I like to think that everyone has some good in them and I’ve never heard anything positive about Nixon.”

Einar writes about this, his first visit with Fuller, in his upcoming book about his 40-year quest to find what he has named the “Fang,” which is, in geometric terms “a space-filler for five-fold symmetry space.” Below, Einar’s geometry at work in one of Olafur Eliasson’s installations, Your spiral view (2002), which I photographed at the Kunstmuseum in Wolfsburg, Germany, in 2004, and is now part of the Beyeler Foundation collection. 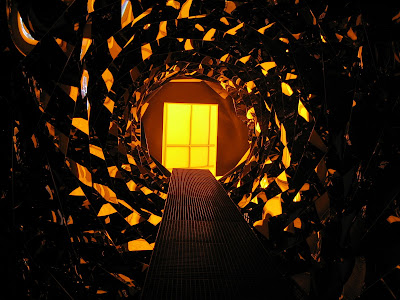 The changing speed of change

December 15, 2008
My houseguest, Einar, happened to find in a pile of magazines, an issue of TIME I’d saved for him, the Mind and Body Special Issue: The Brain, a User’s Guide of January, 2007. Looking through it he commented that not only were some of the ideas out-of-date, the entire magazine, from typeface to illustrations to advertisements, looked as if it was not two years but two decades old—a startling example how quickly things are changing. He also found this prescient article by historian Richard Brookhiser entitled “What’s a Resume Got to Do with It?” about one Barack Obama, the then “freshest face in the early lineup of presidential candidates,” which concludes:

Statesmanship is an art, which means that there is always room for inspiration, and for grace. We are right to look for a record of pre-eminent ability when we can find it. But the basic doctrine of republican government, that all men are created equal, can be a surprise bonus for some leaders, as well as a guarantee of rights for all of us. Sometimes greatness appears in unlikely places, even in ordinary pols from Illinois.
My friend, Valerye, sent me this:

Via my fellow former Chicagoans at The Daily Swarm. And hey, how about a bailout for the Tribune? This Minneapolis editorial makes a case for newspapers' continuing relevance as necessary watchdogs. Just as the automobile manufacturers need to change their products to keep up, so does the print media. If only they realized their job is not to compete with the Internet, but concentrate on those things print does best: in-depth reporting and investigative journalism--photo journalism, too, while we're at it. Ironically, the antique format The New Yorker has clung to all these years (while simultaneously keeping up a big Web presence) turns out to be the most pertinent. There's no question art looks better in art magazines than on the Web, and if we're going to read criticism (which has a responsibility now more than ever to define art for our times) we shouldn't be sitting in front of the computer, but on the couch with a glass of wine. Art in America's redesign takes this into account, and Marcia Vetrocq, in her January editor's letter, promises to bring the magazine up-to-date on the Web with "market reports, updates on exhibitions and events, interactive features, reviews and more." Hopefully this will ultimately include what would be most valuable: an archive.

December 9, 2008
Einar and Manuela are coming to visit next week, and in their honor I’m posting the pictures of their home that I took in October. I met Einar—mathematician, architect, artist, and all round visionary—on my first visit to Olafur Eliasson’s studio in 2004 and a couple of years later he and his wife Manuela, a jewelry designer, took me on a tour of “alternative” Iceland (as Einar put it—I thought all of Iceland was alternative). Their small house outside Berlin fairly bursts with the results of their mutual creativity. Now that I’m posting the Art Vent House Report #3, I’m noticing that the homes that interest me most are chock full o’ stuff, while my own domicile is manically minimal. I’m also aware that while I’m a painter, I tend to write most about installation and sculpture. Hmmm. Let’s not make it mean anything.
Comments (0)

December 9, 2008
Einar and Manuela are coming to visit next week, and in their honor I’m posting the pictures of their home that I took in October. I met Einar—mathematician, architect, artist, and all round visionary—on my first visit to Olafur Eliasson’s studio in 2004 and a couple of years later he and his wife Manuela, a jewelry designer, took me on a tour of “alternative” Iceland (or so Einar called it—I thought all of Iceland was alternative). Their small house outside Berlin fairly bursts with the results of their combined creativity, and being in it you just want to make things. Now that I’m posting the Art Vent House Report #3, I’m noticing that the homes that interest me most are chock full o’ stuff, while in my own domicile I'm manically minimal. I’m also aware that although I’m a painter, I tend to write most about installation and sculpture. Hmmm. Let’s not make that mean anything. 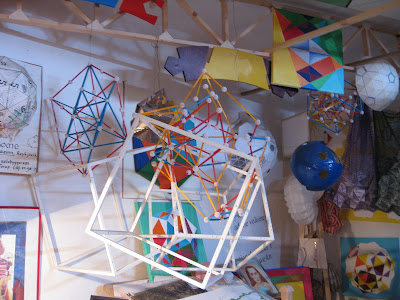 December 9, 2008
In honor of Einar and Manuela's impending visit, I present the 3rd Art Vent House Report, photos I took in October at their home in Brieslang, Germany, outside Berlin.
Comments (0)

Even if you think you wouldn’t be inclined, don’t miss "Twilight", (as Scott asked, “When was there a teenage vampire movie that wasn’t cheesy?”) if only for the kids, who are natural, normal, and totally charming (I kept waiting for the cliché bitchy girl but she never appeared, thank you!). Everything about it—from the acting to the sets to the music—is superb and worthy of the Oscar if would get if it weren’t a teenage vampire movie. A friend’s octogenarian mom pronounced it “The most romantic love story ever.”

(I’m not linking to the trailer because that would ruin it.)

Giorgio Morandi at the Met is up for another week (through the 14th). I liked it, but would have loved it more if everyone in my world hadn’t been raving about it for months. As Roberto said, “It’s a quiet show, so doesn’t lend itself to hype.” What I really loved was Rhythms of Modern Life: British Prints 1914-1939, which is up only through Sunday. There’s an accompanying book, and although the prints’ subtlety and texture doesn’t entirely translate in photographs, if you are intrigued it would be worth getting. 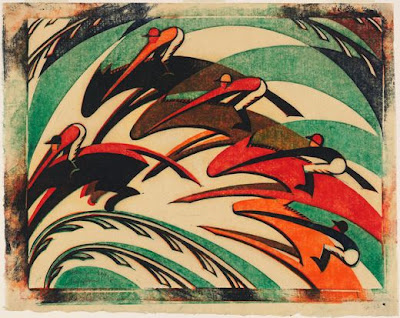