Okay, more about the Whitney Biennial

“Mr. Michelangelo” in a comment below, requested that I analyze the reviews of the Whitney Biennial, and I'm never one to avoid a challenge. First, howver, I want to say that these are adept essays by critics I admire—my quibble is with the format. We live in a strange world of “balanced journalism,” an insidious concept to begin with because it’s utterly impossible and negates the value of considered opinion. Further, because journalists are called upon to give voice to “the other side”—every positive statement must have its naysayer—fringe groups or opinions that might otherwise go unnoticed are given undeserved respectability. Used as we are to this format in the news media, it’s crept into art criticism as well, so that the critic’s real opinion becomes lost in a sea of alternating positive and negative statements.

I first became conscious of this phenomenon two years ago when I read Jerry Saltz’s review in the Voice of the 2006 Biennial, where he starts off with “ ‘Day for Night’ is the liveliest, brainiest, most self-conscious Whitney Biennial I have ever seen,” while the next paragraph begins, “’Day for Night’ is filled with work I’m not interested in…..” –then switches gears with, “Nevertheless, the show is a compelling attempt to examine conceptual practices and political agency, consider art that is not about beauty,” etc. He talks some more about what he doesn’t like (“The show is not without problems…” “This brings us to an irksome feature of this show and many like it…”) before flipping back to, “A number of artists stand out….” so that by the time we finish we’ve completely forgotten that he’s writing about work he’s “not interested in.”

This year, in “When Cool Turns Cold,” a thoughtful analysis of what he aptly calls “the Art School Biennial,” Saltz makes it almost to the end before falling into the trap saying, “On the upside, [the curators] Momin and Huldisch should be congratulated for mounting a thoughtful show that, while academic, is neither dogmatic…nor sprawling…nor sexist…” and concludes with an upswing, reaching for a “striking moment” or two when, earlier on, he already said it all: “There’s little that’s overtly sexual, shocking, angry, colorful, traditionally beautiful or decorative, almost no madness or chaos. The show doesn’t alchemically add up to more than the sum of its parts.”

Peter Schjeldahl starts off by calling this year’s Biennial “the most poetic I can remember” but gives an example of that only at the end, a work that “enchanted” him, while the in-between is filled with descriptions of things that didn’t, his detailed attention giving them more weight than they deserve. I must say he nails the Rachel Harrison experience, however, when he calls her, “the leading light of new sculpture…[who knows] precisely what she means—and you would too if you were just the littlest bit smarter than you are.”

Holland Cotter (who took no joy in the Armory building itself, calling it a “moldering pile”) does the flip-flip thus: “The 2008 edition is…an unglamorous, even prosaic affair, the installation plain and unfocused” with works that have “uncharismatic surfaces, complicated backstories,” followed by, “There are certainly dynamic elements” followed by, “But again, the overall tenor of the show is low-key…” and then “Hard-liner believers in art as visual pleasure will have, poor things, a bitter slog. But if the show is heedless of traditional beauty, it is also firm in its faith in artists as thinkers and makers rather than production-line workers meeting market demands.”

However, I would posit that if Biennial artists were truly “thinkers and makers” their output would be more engaging. Also I want to point out to the world at large that we, as artists, seek “visual pleasure” not because we’re playing to the market but because we are, ahem, visual artists and therefore, not coincidentally, concerned with things visual.

The Biennial, if not beloved—in fact often called “the show you love to hate”—but which at least used to generate excitement, has been slowly losing gas to the point that it’s become so inconsequential that maybe next time these guys can forgo writing about it altogether and put their talents toward covering events that, pro or con, stir their souls.
Peter Schjeldahl, Whitney Biennial 2008
Comments (7)

In my world the Whitney Biennial was such a non-event that I almost forgot to write about it. I went two weeks ago during a rainstorm and rushed through, intending to come back another time for a closer look. Unlike the recent Asian Contemporary Art Fair, which I assumed would be a quick take but where I ended up staying for three hours, nothing in the Biennial entreated me to linger. Instead it came off as gloomy, dated and stagnant, a littered graveyard of academic post-conceptual art. Further, the curatorial offerings as well as the Breuer-designed museum were completely upstaged by the newly renovated Armory at 67th and Park (site of Part II of the Biennial, admission free), where we arrived soaked to the skin. Hardly any art had yet been installed but we didn’t feel the lack as we wandered from room to room, our damp condition forgotten as we reveled in building’s opulence. Built in the late 1800s, the place is totally OTT—a fusion of too many styles and motifs to reference—but its creators, happily, weren’t cool enough to care. They put everything they had into creating an aesthetic experience—and for soldiers, yet. It made me realize how weary I am of cool, of irony, of scorn masquerading as art. I can still handle profundity (no danger of over-exposure there), but I want something to look at, something that gives me faith. 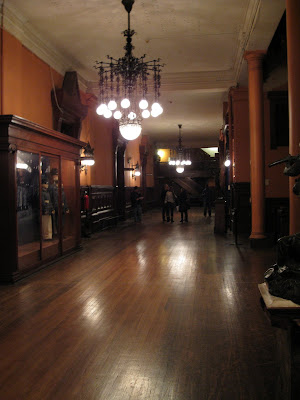 After wandering around, three of us flopped onto a couch in the Armory's vast entry hall. Huddling together for warmth we stayed nearly an hour, while I got up every so often to look at the one of the few completed pieces, Swiss artist

And I like what Breuning said in a video interview, that he "finds creativity through pleasure," a fairly radical statement for an artist these days. I know all too well that there are horrid things going on in the world, but we also need something to live for.
____________
Reviews of the Whitney Biennial:
Holland Cotter in the New York Times
Peter Schjeldahl in The New Yorker
Jerry Saltz in New York

Guess which is which

Last month (2/28) New York magazine featured “Lindsay Lohan as Marilyn Monroe in ‘The Last Sitting,’” by the photographer of the original MM shoot, Bert Stern, and the March “Hollywood Issue” of Vanity Fair features a portfolio of photographs in which contemporary film stars reenact classic moments from various Hitchcock films. Do today’s stars have so little charisma on their own that they have to imitate? It’s hard to imagine Marilyn Monroe being interested in mimicking, say, Carole Lombard, or Grace Kelly wanting to pose as any star other than herself. The only effect these wooden facsimiles had on me was to make me long to see the originals—as well as ruminate on how much I hate art about art.

Or do I? It occurs to me that one of my favorite musical conceits is the cover. Often you more clearly see musicians’ true virtuosity when they take something that seems utterly perfect and untouchable in the original and make it completely their own, Probably my all-time favorite is Tori Amos’ version of Nirvana’s “Smells Like Teen Spirit.” I love how Ryan Adams transforms Oasis’s signature “Wonderwall” into a tender ballad, Madeleine Peyroux makes a torch song out of Elliot Smith’s “Between the Bars,” and the way Elizabeth Cook countrifies the heck out of the Velvet Underground’s “Sunday Morning”….this is a subject about which I could go on and on.

However while good musical covers can often seem like collaborations between greats, when it comes to visual art they tend to cancel each other out. Off hand, I can think of only a few examples of “art about art” that have ever blown me away. One was a series of Warhol paintings after de Chirico that I once saw at a Basel Art Fair and, of course, there’s Yves Klein’s “Venus de Milo” Most of the time, however, it sets up a comparison—with the viewer in the position of judge—where one side, usually the interpreter, inevitably loses. If you’re not as good as the artist you’re borrowing from or commenting on—David Salle appropriating Chardin, for instance, only makes us think about how much better a painter Chardin was—why bring attention to that? And if you’re better, why lower yourself with inferior material?
Well, yes, I did recently do a drawing/painting based a sculpture by Frank Stella, but then I get to contradict myself. 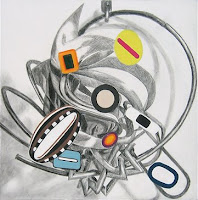 March 16, 2008
Apparently the Emperor’s Club, recently made famous by the patronage of our newly ex-governor, Elliot Spitzer, offered contemporary art and investment services in addition to those of high-priced hookers. Now friends are writing to tell me I’m quoted on the art site. One hardly knows what to make of that distinction.

Don't miss Maggie Gallagher in the Post on the practice of wife-as-prop.
Comments (0)

March 14, 2008
When the Richard Prince show closed at the Guggenheim after being up for four months, I solicited mini-reviews as comments, and didn’t get a single one. I did, however, receive at least 10 emails from people, mostly fellow artists, telling me that they didn’t see the exhibition because of disinterest or lack of time, which is disinterest in disguise because if they really wanted to see it they’d find the time. But the other unspoken reason has to be the entrance fee. Duh! Because I have a press card I just never think about it. The Guggenheim doesn't put their entrance fee on their Web site that I could find, but I think it’s $17. The Whitney is $15 and MoMA is $20. And again, if people really wanted to see something, they’d shell out whatever. However for an artist to keep up-to-date with everything that’s going on in the four major New York museums, not to speak of places like the Cooper-Hewitt ($8), the Jewish Museum ($12), the New Museum ($12) and the Brooklyn Museum ($8), it gets very pricey. The Met’s “suggested” fee is $20, which is nice—try making a "suggestion" to MoMA sometime. So the question then becomes, who are museums for? If a museum does not exist to stimulate the art of its time, what is its purpose?
Comments (5)

The article in the March issue of Vanity Fair about the late Norman Mailer reminds me of how I used to see him out walking in Provincetown, where he lived in Cape Cod. He would not have remembered how once, following a reading at a progressive synagogue that met in my friend’s parent’s home in the Chicago suburbs, he settled on the couch next to my 16-year-old self and suggested that what I needed was to run away with an older man. Looking back on it, he was probably right.
Norman Mailer
Comments (0)

March 13, 2008
"One of the things artists do is make the invisible visible"--artist Frances Whitehead, in an article in today's Times about the house she and her husband, James Elniski, built in Chicago.
Comments (0)