Last Friday night was the first installment of this season’s monthly Review Panel at the National Academy Museum, a series that consistently ranks among the few not-boring art panels in the history of the Universe. This time, as usual, moderator David Cohen stirred the pot, while panelists David Carrier, David Brody, and the razor-sharp Linda Nochlin (whose feminism, with her insistence on the word “germinal” rather than “seminal,” has not flagged) weighed in on four current gallery exhibitions: Maya Lin, Chris Ofili, Kehinde Wiley, and Janine Antoni. 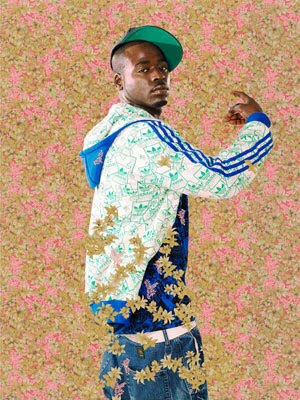 Kehinde Wiley, After John Raphael Smith's A Bacchante after Sir Joshua Reynolds, 2009, Photograph, 31 5/8 x 39"
The last two contained examples of “art about art”: Most of Kehinde Wiley’s photographs are examples of young Black hip-hop guys in the same pose as famous women from art history (odd that no one mentioned Robert Colescott here), and Janine Antoni’s refers to, among other things, Louise Bourgeois’s multiplicitous spiders. 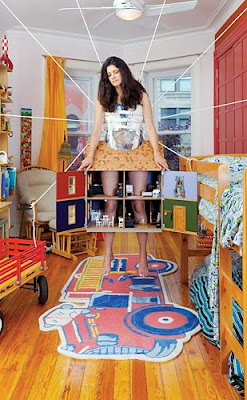 You know my stance on wall text (so can imagine my reaction when David Carrier said he didn’t fully grasp the Wiley paintings without the labels) but have I ranted sufficiently about how utterly lame I think most “art about art” is? Especially when it devolves, like the Antoni piece, into a game of “Find That Reference.”

I want to see art that’s powerful enough to keep me in the experience all on its own, not as a comment on something else, and not something that I have to bring extraneous information to—such as the “artist’s intention”—in order to “get” it.

Or, to put it another way, reference to other art, or anything outside the work itself, triggers an intellectual response that can get in the way of an emotional one. It offers only one interpretation, which makes for a closed circuit, rather than serving as a stimulus to the viewer’s imagination and opening it up to myriad possibilities.

“Art about art” is a lose/lose situation: if artists are better than those they reference, the citation only drags them to a lower level—and if they’re not as good (somewhere I think I used the example of David Salle’s paintings after Chardin) then all the viewer can think about (after “Oh yeah, Chardin”) is how they’d rather be looking at the original..

Uh, except maybe in this case…

So what was the verdict on Lin? I notice her eco piece (is it Something is Missing...?) copped a bit of flak on UK blogs
re: Maya Lin, (like me) everyone professed to being fans in general, but (like me) no one was blown away by this particular piece. I'm looking forward to seeing the one at Storm King, hope to get there before it closes.
just looking and seeing and feeling have been displaced as the destination, as if the route to art has to go through thinking first, full of signs and lights and information....
Well put!
in regards to "art about art," i think it has a potent relevance when the audience considers context. especially in the case of kehinde wiley's latest works where he is redefining his role in western art as an african american male artist.
also, i thought it to be magnificent that his models were not only "hip hop guys" but both african and african american.
yet, usually i agree with you full heartedly.