When I was a kid growing up in Chicagoland (they actually call it that) every summer we spent two weeks at Hanson’s Cottages on Plum Lake in Sayner, Wisconsin, way up above Eagle River. Every morning my father got up early to catch sunfish, and my mother cooked them for breakfast. We kids rowed, swam, and occasionally fished, but the big event was when Mr. Hanson let us go with him on the Jeep to the dump where we sometimes saw bears. This is making my childhood sound more interesting than it really was. It did, however, form my idea of what a vacation should be: lots of reading, hanging out, and eating, somewhere near water. No air travel, nothing deductible.

This vacation at the Cape, the first like it in years, definitely qualified. After three lobsters, three crème brulees, an evening of manic living room karaoke, early morning pond swims, outdoor showers, too much sun, perfect surf, and haddock every morning for breakfast, I was refreshed and renewed. I didn’t read anything heavier than Spin and didn’t go near a computer. (I have to admit that there was a moment when I was tempted to post, but my friends restrained me. Friends don’t let friends blog on vacation.) The only downsides were mosquito bites and Sarah Palin’s speech accepting her candidacy for vice-president of the PTA, which we felt compelled to watch. However the next night, instead of listening to McCain, we went to a lecture by Thomas Nozkowski at the Fine Arts Work Center in Provincetown, which proved to be a more worthwhile use of our time. An artist who makes only about twelve small paintings a year, Nozkowski’s down-to-earth presentation made me itch to get back into the studio.

The September Spin I was reading had an interview in which Patti Smith, after stating that she's neither analytical nor philosophical, is nothing but philosophical. Resisting categorization, she addresses her multiple roles:

…my goal in life was never to become a musician. I’m not a musician. I drew and wrote poetry for ten years before I wrote Horses. I published books. Why do people want to know exactly who I am? Am I a poet? Am I this or that? I’ve always made people wary. First they called me a rock poet. Then I was a poet who dabbled in rock. Then I was a rock person who dabbled in art. But for me, working in different forms seemed like a very organic process. From an early age I studied people like DaVinci and William Blake and Jean Cocteau. They all did a lot of things. But if you want to call me anything, call me a worker. I do work.

The next time someone asks me if I consider myself more of a painter than a writer or vice versa, I’m going to say, “I do work.”
-- 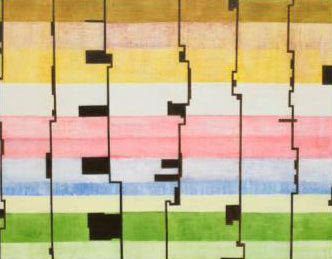 I went to that lecture too, would have loved to say hello (am spending the month at the FAWC). I loved the idea that his paintings are shorthand devices for remembering the important experiences of his life, distilled into abstract imagery that only communicates directly to himself. Sort of reminded me of Leonardo's backward writing or something.