No, I have not fallen down a rabbit hole, just swamped with work while fighting off the early winter blahs. I did attend some art-related events, though, one being my eye exercises but this one—with Mario Naves, Ana Finel Honigman, and Joe Fyfe, talking about current exhibitions by Sue Coe, Elizabeth Peyton, Lothar Baumgarten, and Ron Gorchov—was short, sweet, and engaging, with a question and answer session at the end where the audience members revealed themselves to be as knowledgeable and thoughtful as the panelists. Future review panels:

On the way I caught Jenny Holzer’s projections at the Guggenheim,.which illuminate the exterior of the building every Friday evening through December 31, 2008, with a special additional showing on New Year’s Eve: 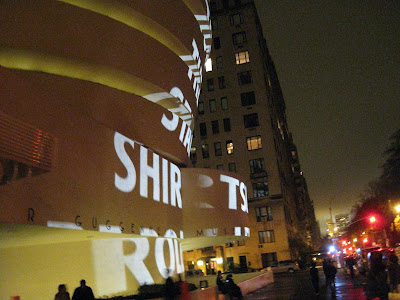 And finally there was the opening at Mass MoCA for the Sol Lewitt retrospective of 105 wall drawings. I didn't take any pictures, but will have plenty of opportunity as it will be up for the next 25 years.
Jenny Holzer

Glad you're back!
winter blahs already! BLAH!
glad you're back as well!
All the dates/panels look really interesting.
I recently came accross your blog and have been reading along. I thought I would leave my first comment. I dont know what to say except that I have enjoyed reading. Nice blog. I will keep visiting this blog very often.