I think a lot about art and its context, especially after the Serra show, where the surroundings were too severe, and then visiting Wave Hill, where it’s a challenge for art to compete with the gorgeousness of the place. Actually, the grounds are art and should be seen as such. The design is the concept of a singular man—Scott, who knows everything, told me—the recently retired Marco Polo Stufano. One wonderful thing is the unexpected juxtaposition of vegetables—fabulous heads of shiny purple lettuce, corn even—with more traditional ornamental plants. However there are certainly artists who would be up to it, either by contrast or by fitting in, who could make even more of that site, or the rooms of those elegant buildings--Robert Irwin being one of them, of course, and Spencer Finch if he were trying (while I love his Mass acheter viagra MoCA show, his offering at Wave Hill was lame at best; perhaps he thought no one would see it).

My first experience of the inspired confluence of art and architecture was in the early eighties at a Pop Art exhibition in Venice’s Palazzo Grassi, where a giant Warhol Mao, at least 20-feet-tall, was installed in an impossibly ornate room that I remember as being taller than it was wide and ringed with several stories of balconies. Ever since, my impatience with the white box has been growing. I think it's one of those art world assumptions—having to do with the notion that art is sacrosanct and should not be interfered with—that took hold and now, never questioned, is self-perpetuating. (Along with another of my bugaboos, the idea that items in a retrospective need necessarily be installed in chronological order.)

I know that, as an artist, I’m not supposed to like Frank Lloyd Wright’s Guggenheim, but I do, and not just because I welcome any opportunity to walk uphill. It always feels special to go there, an event, and more than any other museum, I have distinct memories of not only the works I’ve seen there, but where and how they were placed, how I felt coming upon them, and how they looked from a distance, across the atrium. What other museum offers you a view of something from eighty (I’m guessing here) feet away? In the Guggenheim you view works one at a time, whereas in the white box you must make choices about what to do with your attention, so whenever you’re looking at something you must always be conscious of what you’re not looking at as well.

Thus my irritation with the Serra installation at MoMA (the white box plus track lighting—ugh!) and don’t even get me started on the Brice Marden show. All right, get me started. I like Marden’s paintings. I’ve come upon a single Marden somewhere and been blown away, and I remember seeing a perfectly exquisite Marden show at the Serpentine Gallery in London. But I wouldn’t want to be Marden. To have to get up in the morning and face those canvases day after day? (As a rock musician friend said, after I played him Philip Glass, “It’s a dirty job, but somebody has to do it.”). And when you combine repetitive paintings with a repetitive installation you come up with something you want to walk through very fast. Curators who insist on mounting the works in chronological order (and I’m not saying it might not work in some cases—as Robert Irwin says, “Sometimes the best solution is the cannon on the green”) are making a statement that values development over aesthetic experience. In Marden's MoMA exhibition, I would have liked to see the ribbon paintings interspersed with the monochromatic panel paintings; this would have created a textured environment where each piece could be seen on its own merits, without the distraction of an almost identical one next to it. To find out about Marden's process of development, there could have been a handout and/or wall text at the end, illustrated with small reproductions, that listed the order in which they were created.

An example of a thoughtfully installed show that doesn’t lean heavily on chronology is the Louise Nevelson retrospective at the Jewish Museum (on view into September). And according to Art Daily, Michael Govan, formerly of the Dia Foundation and now the director at the Los Angeles County Museum, is intending to use artists—including James Turrell and Jorge Pardo—as designers. What if one artist were to design the exhibition space for another? How cool would that be? I’d let Robert Irwin design a space for my paintings! Rem Koolhaas designed an exhibition for Terry Winters in SoHo once upon a time, which could have been more successful (except I do remember it clearly, which is something), but given how fabulous his Student Center is at the Illinois Institute of Technology (below)—when you are in Chicago, don’t miss it!—if he volunteered I’d let him have a go as well. 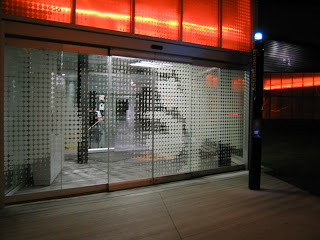 Other people thinking creatively out there include architect Jean Nouvel who, in his Paris Musee du Quai Branly for indigenous art, has completely rethought the museum experience. It’s a place where the architecture is very evident, but serves only make the art look better. When I was there in October they wouldn't allow photography inside, but to whet your interest here's an exterior view: 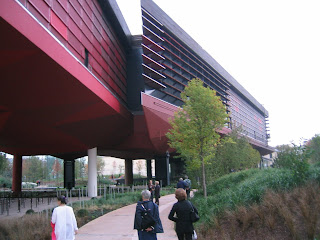 Not all artists want a pristine environment for their work. When I was talking about this with Judy Fox, she told me she fanaticizes about having her life-size sculpture of Snow White in her glass coffin being purchased by collectors who will use it as a coffee table “with the children’s book,” she says, “as the coffee table book on top.”
Judy Fox
Robert Irwin
Sculpture
Richard Serra

Scott, who knows everything, believes that the correct spelling of Marco Polo's surname is StUfano...
Correction duly noted and changed.
a great read! I love this space where you say whatever you want to say...good stuff...