I’m online after another weekend of hell with Verizon DSL Customer Service, clearly a misnomer. Please, please bring back the era of public utilities, because what we have here is the worst of both worlds—a private, profit-making company with a monopoly. For some reason, I only have trouble on the weekends, when getting through to tech support is possible only after over an hour (and I’m not exaggerating) of continually calling and yelling “repair” into their voice prompt system (a repair guy also told me to punch in “1” five times—this also worked once, after half hour of trying and calling back, etc. but then didn’t work again). I’ve been this route before, so therefore knew there were willing tech support people amassed in Calcutta just waiting to talk to me if I could just get past the supercilious voice prompt that kept telling me the offices were closed and to call back on Monday. So after that hour of hysterics I did finally get through to “Abby” who (after asking me such questions as “do you have a dial tone on that line?” which I hardly knew how to answer since I was talking to her on that line and she had the number in front of her) made an appointment for a repair person to come to my “premise” on Monday. I’ve been trying to get people to come to my “premise” my whole life. It’s gratifying to learn my point of view is finally taking hold.

So Monday came, and after several hours of panting up and down the three flights from the basement to my studio and back again, the very nice repair guy fixed everything—for now. After all, the last guy thought he fixed everything, too.

Tuesday I got a voice message from Debbie, at the local company that provides me with propane, telling me that even though I’d signed up for their “budget” plan, where they deduct a predetermined amount every month from my credit card, the number of which they have on file, I would still need to call her each month to “remind” her. I did not make this up—however the delivery guy, who came the next day, was able to go back and set her straight (I get my tank filled 3 or so times a year, for a total of $2200 to heat about the same number of square feet. He told me he has a client he goes to every week. “It’s a big house.” OMG.)

Wednesday it was Design Within Reach. I’d phoned ten days before to say that the replacement bulbs they sent me for my Cortina Table Lamp didn’t work, yet hadn’t heard from their tech department as promised, nor did I get an answer to my “Contact Us” email—so tried Customer Service again this afternoon where I got J., whose only proposed “solution,” which she repeated over and over, consisted of sending me another set of the same bulbs, because those were the only ones they had listed for that lamp. After hearing that one more time than I could stand, I hung up.
Let me digress a bit to say that I believe (or did believe) in designer lighting—to the point that it’s been something of an obsession. I think crappy lighting makes even the most expensive furniture look crappy, whereas a designer lamp (like this Artemide Tizio lamp I have on my desk) brings everything else (scarred library table bought off the back of a truck at Broome and Greene, Ikea bookshelves and Kmart computer stand) up to its level. 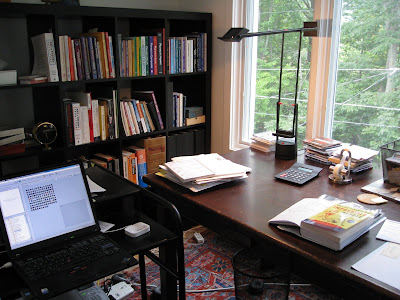 Although expensive to begin with, I saw my designer lamps as mini-investments that would hold their value, which I could sell if I moved or changed my mind. I’m not so sure anymore. Although I’ve had great luck with Artemide (I sent a lamp, broken by a visiting child, back to the factory for repair and they turned it around as quickly as if it were a computer), a very expensive B.Lux lamp went kaput because a fuse burned out—a fuse that’s now unavailable. The company’s solution was to offer me a new lamp at half price—still a hefty amount—but I did it because I’d designed part of my house around it. Now the Cortina Lamp, which I’ve had for about six years, is out-of-date and needs (according to the manufacturer who I looked up online and called myself, thank you very much, DWR) for me to send back my old base for a new dimmer that will accommodate the new bulbs ($25 plus $13 shipping each way)—or buy a completely new base for $70. (Update: I called the manufacturer again yesterday and got someone else who offered to send me bulbs she thought would work. Customer service tip: keep calling until you get someone who tells you what you want to hear).
So while I’m not quite ready to entirely give up on designer lighting, I’d advise anyone who’s willing to shell out that much money for it to be aware of the possible pitfalls—and stock up on lots of replacement bulbs.
I know, I know, these should be the only problems I have in life. But it may be an extremely long-winded way of addressing the national situation of economic depression (or maybe just depression), which I think may be happening because we simply no longer know how to conduct ourselves in business. How different my week (and their profits, no doubt) would have been if the people I dealt with had been actually trained in customer relations and there was some incentive for them to think rather than just go through the motions (at least the simulated person manning the phones at Verizon is making no bones about it).
For those in customer service, or just life, I recommend a small book: Bullies, Tyrants, and Impossible People: How to Beat Them Without Joining Them by Ronald M. Shapiro and Mark A. Jankowski. The authors tell you how to identify the type of difficult person you’re up against, and suggest methods to handle them accordingly. These are the “Situationally Difficult Person” – a normally reasonable human being who simply has been pushed to the max, the “Strategically Difficult Person”—someone who’s employing certain learned strategies to get what they want, and the “Simply Difficult Person” –a person who you can’t predict or negotiate with, who’s reacting to all kinds of emotional triggers.
Most people who call customer service, including me, are among the “Situationally Difficult”—people who are irritated because something isn’t working, for whom an apology and a little empathy would go a long way. Suppose J. at DWR, instead of insisting over and over that they sent the right bulbs so therefore they should work, end of story, had said: “I am so sorry no one called you back; I’d be very frustrated too. Let me see what I can do to help.” And then, of course, she’d actually have to call the manufacturer, as I ultimately did, but is that really too much effort to keep a loyal customer?
When he came to fix my line, the Verizon guy was empathetic. “No one should have to go through that,” he said, referring to the voice prompt system. A friend, who had had the same experience, likened it to the Bush administration, and after a couple of days of thinking about it, I see what means—people who say they care when they don’t really give a shit—as with Katrina, or the returning injured from Iraq. When the people at the top are insincere and unaccountable, it has a trickle-down effect. What a difference it could make—will make—to have a president who could actually be a role model.
Wow, I had no idea where this was going; it’s turned out to be my longest post ever when, really, I was just sounding off about Verizon. But you know what? I just tried to publish it and discovered that the DSL light is blinking again, and I can’t go online….
Homes and Gardens

I have found that when I scream at the top of my lungs at the voice prompt, the system can't understand what I say. Do you suppose they programmed it that way on purpose?

If it's any consolation, Comcast is no better. Their computer shut me down once--I could receive e-mail but not send any. It took me five phone calls,including the requisite one to India that required 30 minutes of tweaking POP3s, to reach a person who could tell me why: I'd gone over my quota of allowable daily e-mails. (I was sending an exhibition announcement to 1600 of my closest friends.) The computer saw me as a spammer, and I was in lockdown and there was nothing anyone could do about it.

"So what is the limit of daily e-mails," I inquired. "I'm not sure," replied the Comcast person. He put me in touch with someon else, who put me in touch with someone else, who in turn put me in touch with someone else. Here's the answer: 300, 400, under 500, and my personal favorite, the precise and ever so useful, "Just don't send too many."
After the hell I went through Thursday afternoon, reading your piece just made me feel better. Or, actually, I guess it should make me feel worse, as poor customer service is obviously the state of customer service, period - and we should all just accept the fact that you need to spend entire afternoons and maybe weeks to have problems remedied. Rather than detail my latest personal peeve, let me suggest to anyone reading that they never attempt a purchase from the HP Parts Store.
Thanks for the commiseration. Actually I don't start out yelling. Before each time I call, I take a moment to sit quietly, make sure I'm really calm, and set the intention that this time will be different, this time I won't lose it--because I realize, in the end, that the only person who suffers from all this emotion is me. Once I've assured myself that I have it under control,I begin by speaking in measured tones, as clearly as possible, but after not being understood by the voice prompt the tenth time around I JUST CAN'T TAKE IT ANYMORE.

I have signed up to have Time-Warner install cable. So far when I've called them I've been able to reach, with only 3 hits of a button, a real live person in Schenectady, English-speaking with a first and last name, an extension number and voice mail.
Will keep you posted.

And I'm getting Vonage for telephone service because they could transfer my number while Time-Warner couldn't.

It's been quite a week. At least it distracts me from thinking about Sarah Palin. Sarah Palin! The Harriet Miers of vice presidental nominees.