Yesterday I went to Chelsea and liked everything I saw. No, I haven't started writing fiction. Am I getting soft in the head? Or did I die and wake up in art heaven? I first had an inkling of this in February, but it seemed too good to be true. Now, like someone who’s been through a series of bad relationships and finds it difficult to trust again, I’m tentatively allowing myself to be gently optimistic.

The last ten or more years have been tough on artists who take their work seriously. It's been challenging to persevere in a world that didn’t seem to value quality—to extend the analogy, like giving excellent love to someone who could care less. And in my other vocation, as an art writer, I’d go months without seeing anything that inspired me to put time and energy into writing about it. Now it’s hard to pick and choose and, in my enthusiasm, I may have taken on more than I can handle.

Also yesterday began and ended with a rethinking of artists I had previously written off (I love having my mind changed in a positive way; it's like yoga for the brain). The first was Rebecca Horn at Sean Kelly, whose glorious, light, oversize paintings on paper completely obliterated memories of the tower of rusted steel on the beach in Barcelona that prejudiced me. Also Walton Ford at Kasmin, whose new work has more weight and subtlety, with a new substance of concept that matches his technique. Then, as I was leaving Chelsea, I was drawn through Luhring Augustine’s open door by the energy of giant gestural grisaille abstractions by Christopher Wool, an artist whose work I’d previously only tolerated. 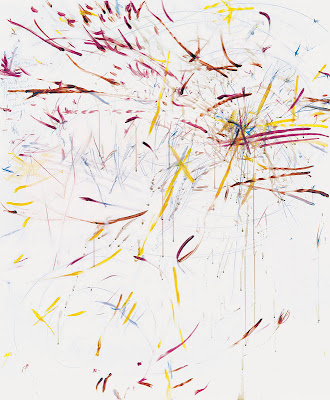 Also this contemplative installation with water and reflection:

In between there were Rory Donaldson’s photographs at Winkleman, and Jeremy Gilbert-Rolfe’s beautiful paintings at Alexander Gray. I can show one here, but, like most everything, they don’t sing in reproduction as they do in person:

And Ann Pibal's rigorous yet quirky paintings at Max Protetch: 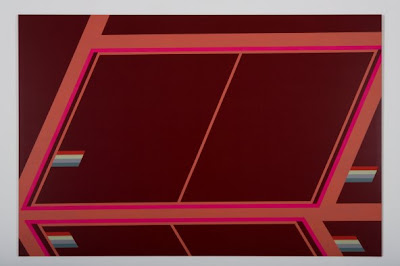 Word on the street after the opening of Geometry as Image at Robert Miller, was that it wasn’t a great show. That was also my take, but viewing it without a hundred million other people surging around me it was a pleasure, especially circumnavigating the Kenneth Snelson sculpture and seeing how it sets up Fred Sandback-like planes that are there and not there.

My hardy, gallery-going companion, Catherine Hamilton, and I struggled up in the elevator (friendly elevator guy, though, it helps) and down long hallways to the Bryce Wolkowitz Gallery for an excellent group show with a fascinating slow-time video piece by John Gerrard and yet another beautiful Olafur Eliasson lamp (I know Olafur works with a studio full of people—I’ve been there—but I’m beginning to think he had himself cloned a long time ago; he has another double museum show opening in and near Barcelona in June), and then to Tanya Bonakdar to have fun playing on a stringed instrument he had a hand in conceiving, on which you can make circular drawings to take home.

I didn’t even finish seeing everything on my list. But there's still tomorrow and Friday, with friends' openings: Greg Drasler at Betty Cuningham, and Jude Tallichet at Sara Meltzer.

Off the Chelsea path, other work I liked a lot: Tomma Abts at the New Museum and Gert and Uwe Tobias at Team Gallery, 83 Grand in SoHo.

Update from Friday: The Milton Resnick show at Cheim & Read is spectacular. Before this, I only knew his more monochromatic work, but these earlier paintings represent the best of abstract expressionism. Also Thomas Zummer at Frederiecke Taylor.

I spent two full afternoons in Chelsea and still things slipped through the cracks that I now must go back to see, including Mark Di Suvero at Paula Cooper.