"Susana" AKA "The Devil and the Flesh"

On Christmas Day we watched a couple of old movies, one being “All Fall Down” a 1962 William Inge screenplay with a devastatingly attractive 25-year-old Warren Beatty (“man enough to attract a dozen women…not man enough to be faithful to one”), in which a desperate Eva Saint Marie drives off a cliff because he refuses to acknowledge her pregnancy. And "Susana," an early (1952) Bunuel, filmed in Mexico, where a “bad girl,” escapes from a reformatory (in high heels, which makes for some tough going in the mud), is taken in by a wealthy ranch family and wreaks havoc, seducing the son, father, and trusty foreman before being caught and again incarcerated—thereby ensuring that the ranch family lives happily ever after, the men totally exonerated because they’re men, of course, and could hardly be expected to restrain themselves in the face of blonde temptation.

It made me realize that the times we live in are not so bad after all, that we’ve made a lot progress, and have much to be grateful for. I think about how, when my ex-husband entered Evanston Township High School in suburban Chicago at the end of the fifties, there were separate swimming pools for black and white students. How, when I married at nineteen and moved to New Haven in the sixties, selling any form of birth control—condoms, prescription diaphragms and pills, whatever—was illegal in the state of Connecticut. How, in the seventies, a vice president of the company that published Art in America used to think it was fun to stop me at the elevators, feel my back to see if I was wearing a bra, and snap it if I was—and I had to be polite to him or risk losing my job.

I think about how the words “meditation,” “yoga,” “acupuncture,” and even “massage” (except in conjunction with “parlor”) were not part of the vernacular.

I think about how I spent Christmas, 2007, at the home of openly gay men, one of whom has health insurance as a result of his partner’s employee benefits. How thrilled my friend, Laurie, a single mom, is with her adopted Mexican son, and even if he’d come to her the Warren Beatty way, everyone would be happy for her because she's happy. How I can go to a club or restaurant now—even in France, as of today, January 1st—without being overcome by cigarette smoke. I can’t even remember life before the Internet, but I do remember what a drag it was to have to take film to be developed; what am I supposed to do with those boxes of old negatives, anyway? And slides…oh my god…as artists we have been relieved of a terrible burden.

Of course there’s more to do. But now we know it, whereas back in the fifties and early sixties, no one had a clue—and any discomfort, at least in my parents’ social set, could be drowned in WASP alcoholism, socially sanctioned as long as the highballs didn’t start before 5:00.

So in this worst and best of times, let’s make a list of our blessings, and welcome 2008 with optimism, an open heart, and a willingness to make life even better… 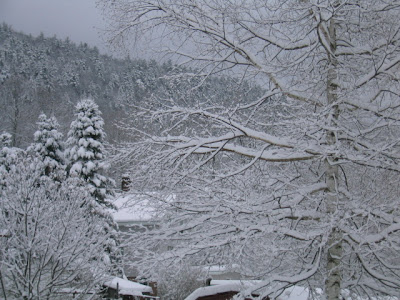