In the latest issue of The New Yorker (December 24 & 31) there’s a cartoon by Michael Maslin of two toddlers in a playroom, and as their mothers approach, one says to the other, “Here they come—act infantile.” It reminded me of a conversation I had with Judy Fox, where we were talking about drawing being all about observation (but then, isn’t everything?), and I said I thought we underestimate children’s abilities, that if they were shown more sophisticated ways of seeing their world they’d be able to represent it. I was thinking about how my father, an engineer, taught me to draw in perspective when I was five. My early talents lay with music, and artistically speaking, I don’t think I was particularly precocious—yet as soon as my father pointed the concept out to me, I could draw it. Judy told me that when she was little, she drew stick figures because she thought that’s what she was supposed to do. Then one day in school when her friends were wondering what adults looked like naked, she volunteered that she’d seen a naked adult and proceeded to draw them a picture—with such graphically detailed breasts, nipples, belly button, and pubic hair that it was immediately confiscated by the teacher. Ultimately Judy grew up to be a sculptor of naked people, but at the time she took the wiser course and went back to stick figures. 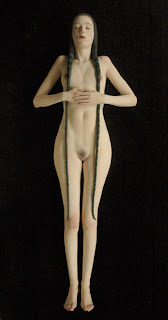