Our cabin at the Motel Alex near the airport, around 1:00 a.m., with campers sleeping in tents all around. It's hard to remember to be quiet when it's so light out.
Okay, I admit to being an Icelandophile. I love that it's so incredibly rugged and isolated yet inhabited by some of the most sophisticated and creative people in the world. And I love the way of life: daily swimming in geothermally heated outdoor public pools could easily get me through any long, dark winter. Open into the evening, the pools are community gathering places for everyone from moms with toddlers to high school kids, to old guys soaking and yakking in the hottest (44 degrees Celsius, 111.2 degrees to us, yikes!) of several “hot pots.” Because of the Gulf Stream, the temperature in winter is roughly that of New York City (if you don’t take into consideration the harsh Arctic wind), and in summer hovers around 60F. People always associate the extreme northern countries with high rates of suicide and alcohol consumption, but doing research I found that (except for Greenland with the highest suicide rate, which spikes in summer) statistics don’t bear these assumptions out. In fact one site lists Icelanders as being the happiest (this before the economic crisis). They at least enjoy some of the best health, and have a 100% literacy rate. Although most in Reykjavik speak flawless English, they prefer to communicate in Icelandic, and the number of books one finds in the stores translated into or written in a language spoken by only around 300,000 people, boggles the mind.

Erica noted that everyone walks slowly to the point where, if we concentrated on it, the people on Reykjavik’s main shopping street appeared to be moving in slow motion. They are also quiet spoken, but at the same focused and deliberate. Is this because their sense of time is so unlike ours? In Iceland, rather than moving through time, you are suspended in it, and indeed we were told that the Vikings didn’t divide the year into months but gave each day its own name. I loved that it was light all the time, although the landscape seems less dramatic (if that’s possible) in summer because the light is more diffused. When I was in Iceland in the fall, the sun hovered just above the horizon, always in your eyes and casting long shadows from even the smallest rocks. Last week there was an hour or so of twilight around midnight and then, with a change that was more sensation than visually perceptible (something a photograph, for instance, could not capture), it would shift to dawn. In the space of a few minutes I’d go from anticipating more of the evening ahead to feeling as if I’d been up all night and wanting to go to sleep. There was also a different pattern of activity—more people out on Reykjavik’s streets at midnight on Saturday than at any time during the day. 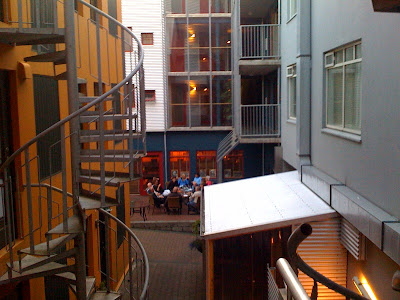 Not only is there no familiar reference for time in Iceland, there’s none for space. With no in-between, nothing in the middle range, you have only near and far—no way of telling whether it’s a walk to the mountains you see in the distance, or an hour’s drive. This makes the landscape nearly impossible to capture in photographs, so most photographers try to include something for scale—a building, an animal, a person in a boat—which makes for images that make it look like a National Geographic Anywhere. Certainly not Iceland, because what distinguishes Iceland is that there’s NOTHING there. Outside the city, you have to plan where you’re going to get gas, eat and, yes, pee. The tourist board publishes a map of the entire country with red dots--and not a lot of them--indicating rest stops “with W.C.” As for dashing for cover by the side of the road, forget it. There is no cover. You haven’t seen a car for at least 20 minutes, but if one of those giant SUVs (you need them in Iceland) with the high wheel beds were to suddenly come barreling across the gravel, you’d be completely exposed. 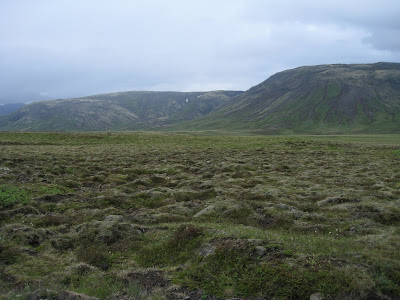 ...with Terry and Erica shooting landscape for our video project, for scale.
On our drive, my companions and I had a misunderstanding. Too late I realized we were setting off on the route to a certain waterfall, which meant forgoing the restaurant Einar recommended. I was wondering, did they really intend to go without lunch and dinner? Now I realize that they must have been planning to pick up something on the way, while I was thinking this is Iceland, where there is no “on the way,” and if we know of a food source, we should go there. We did, happily, find our way to another restaurant where Erica pronounced the lamb chops “worth the entire trip.”

Landscape at Þingvellir, with flowers for scale

Gullfoss: if you look carefully, you can see people standing on the top of the ridge
Iceland

Thanks for the pics and commentary. Nice.

I went to Iceland once, in May in the early 80s. I liked it, except for the part where everyone smoked during dinner. Let me amend that: not during dinner, not even between courses, but between mouthfuls.

One thing I loved is the Icelandic mindset. Here I was thinking of them as isolated beyond geographic comprehension, while they were thinking of themselves as centrally located, equidistant between the US and Europe.
Smoking...like the French at the time. I always thought the French ate with their left hands so they could smoke with their right. Fortunately, there's no more smoking in restaurants--even in France--and except for the hotel employee who was puffing away under our window, cigarettes were not that evident in Iceland.

Yes, Icelanders are very cosmopolitian, being only 2 1/2 hours from London, for instance. One twenty-something woman told me that when she was in high school (those were the flush times) she and her friends would regularly go to Denmark to shop. And that wherever she goes in Europe, she's never taken for a tourist.
I wanna go I wanna go I wanna go.
Me too me too! So beautiful and strange! The Icelanders I met in art school were the coolest, most cosmopolitan (and spoke the best English) of anyone. My only Icelandic qualm is why did Bjork marry Matthew Barney? But I wouldn't hold that against the entire country.
Thanks for this, Oriane; it gave me a good chuckle. I guess I have to take off my rose-colored glasses and admit that not ALL Icelanders have the good sense I attribute to them.