I’m loving Chicago! Having a home town guy in the White House seems to have caused it to shed its Second City inferiority complex (which always drove me crazy) and stand proud. The only negative is the hysteria over the swine flu “epidemic,” which has schools closing and gatherings being cancelled. I’ve always washed my hands before meals—as my mom taught me to—and carried a little bottle of Purell with me to make it easier, silently marveling at my New York friends who’d get out of a taxi or the subway and sit down to dinner (and sometimes prepare food—yuck!) without doing so. Maybe the good side of this is that it will make everyone more conscious of something they should have been doing all along. Meanwhile I use my Purell more surreptitiously, because I don’t want to add to the fear-mongering, and am frequenting Mexican restaurants (so good in Chicago!), because they probably can use the business.

I thought Art Chicago was pretty boring—only a handful of really good galleries represented—but, to my surprise, loved the Antiques Fair a few floors below. Meanwhile the Olafur Eliasson exhibition at the MCA (through September 13th) has caused a lot of excitement—as I mentioned, so much better than at MoMA and PS 1—and the the pairing with the Buckminster Fuller show (through August 9th) is genius, because you can see the lineage. As I’ve no doubt mentioned before, Einar Thorsteinn, who works with Olafur (“helps me with models and helps me to think,” as Olafur said in his artist’s talk), was a protégé of Fuller, and so here you can look at Fuller’s models and then go downstairs and see how Olafur and Einar have taken off on them in their own models, made them more fanciful, and then elaborated on them in large works. There are also interpretations of Fuller’s work by sculptor Kenneth Snelson, which are gorgeous. I wish I had images to illustrate all of this, but I was only able to photograph Eliasson’s exhibition while accompanied by a representative of the MCA, and had not made an appointment to shoot the Fuller show.

Let me go off a little bit on this policy of no photography, which is shared by the Whitney (but not by MoMA), and the reason I didn’t write about Jenny Holzer’s show here, which I loved. Yes, I could have gotten images from the museum, but if they didn’t reflect my vision, I’d just be doing P.R. I could understand it in the old days, the concern that a lousy shot taken on someone’s Brownie could end up in a magazine as representative of the artist’s work, or that people would produce coffee mugs and T-shirts with a pirated image. But today, when the influence of print is lessening and word-of-mouth rules, why would you want to insist on stopping someone from taking a picture with her iPhone and emailing her excitement to all of her friends? As for artists, photography is a way of recording what is important to them—not some commercial photographer—ideas that they may want to incorporate into their own work. As we all know, major museum exhibitions have an influence on the art that comes after, and to limit that in any way seems counter-productive. 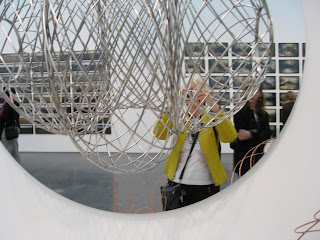 Museums seem to be catering more and more to the casual visitor while distancing themselves from artists. First there’s the entrance fee, which limits when you can see the work (in crowds on free night). I tried to get a friend who’s a professor of art in Iowa into MoMA on my press card with me, and was told she could come in for free if she had a group of students with her. But even if she were teaching in New York, doesn’t she have to see the show first, to decide if it’s something she wants to bring her students to? I know so many artists who choose to pass on major exhibitions because of the fee, and often if you find a good show, you want to see it more than once. In Chicago, no doubt, many artists can afford to join both the MCA and the Art Institute (or “INSTITVTE” as it reads on their Web site—yikes!), but in New York, with a plethora of major museums, cost becomes prohibitive. I propose that the New York museums get together on an “artist’s card” that would allow entrance to all the museums for a yearly fee of $125 or so. Verifying that someone is an artist is easier now than it was back in the day when I had to prove my professional status to the city in order to live in SoHo—it can be anyone who has a Web site featuring their work, or is featured on a gallery Web site. Such a policy would increase not only traffic but word-of-mouth.

That said, here are some random shots from the Eliasson exhibition:

Your eye activity field, 2009, oil on canvas (detail). Created for the MCA's lobby and atrium, this series of 300 canvases (approximately 6" x 14") represents the 300 nanometers of the color spectrum that can be seen by the human eye

Beauty, 1993: a spotlight shining obliquely through a curtain of fine mist.

From the model room

Inverted Berlin sphere, 2005, with a detail of Multiple Grotto, 2004 (left), which incorporates elements of the model seen above.

Colour sphere embracer, 2005, colored glass rings suspended from the ceiling nestle inside one another while a motor simultaneously rotates each in a different direction.

Carol, despite our official status as starving artists (I invoke the State Poverty Level for a family of 2), my husband and I always try to pony up the $120 for an annual MoMA membership. We can bring guests for $5 each (which is actually a lot for us, but maybe not for them) and there's always a nice clean bathroom to go to when the need arises.

Imagine my surprise when we went to the LA County Museum last fall and we were allowed in for free based on some reciprocity agreement among museums? We waved our MomA cards and the LACMA treated us as one of their own.

Why does this not happen in New York? I can't remember the last time I even set foot inside the Whitney. And the Guggenheim was with a comp I managed to snag off someone with influence. I go to the Met regularly and pay my pittance, but really, what would these institutions be were it not for artists?

By the way, I completely agree with your stand on photography in the museums. I have a very good visual memory, but after so many years, the works in each collection begin to blur. Besides, despite all the current de-accessioning brouhaha, paintings do move around. The printed catalogs are always out of date. And besides with OCR software, I have been able to transcribe the label info and store it with my images (a terrific aide de memoir)