Art Jury, but not really

April 23, 2010
This is an idea that all art schools should adopt: a mock jury, so that students can see what happens when experts are alone with images of their work, find out what they really think in an impersonal, non-confrontational way.

Tuesday I participated in the Second Annual Fourth Wall Panel Review as part of the Pennsylvania Academy of the Fine Arts’ (PAFA) graduate program. The idea was to invite an artist (James Hyde), a curator (Robert Cozzolino), and a critic (I was wearing my critic hat) to publicly view and discuss the anonymous digital images and written statements of nearly thirty MFA thesis students in the program (a lily-livered few declined to participate) and narrow it down to the three we found most competitive for the kinds of professional opportunities—grants, residencies, exhibitions, teaching positions, etc.—that are determined in this way. It provided the students, attendees from other area institutions, and the general public, with fly-on-the-wall insight into this otherwise secret process.

For three hours we sat with our backs to the audience facing the screen on which the images were projected. The panel differed from others I’ve been on in that there were fewer artists (30 as opposed to several hundred) with more slides each (10), and instead of simply dismissing those we weren’t interested in, we discussed our reasons for doing so. We also took the artist’s statements into account where normally, at least the panels I’ve been on, if they’re considered at all, it’s only to make distinctions at the very end.

Shall we digress onto the subject of artists’ statements? Oh, why not. So I ask: why is it that every time I’m in a situation like this, my colleagues and I unanimously agree that the concept of artists’ statements is ridiculous, yet this relatively new invention persists in being seen as an essential aspect of the artist’s promotional package? Further, statements often work against the artist. As the director of a not-for-profit gallery once told me, “Often we’ll find an artist we like and then read the statement and say ‘no way.’”

The PAFA statements were no exception, containing the usual damning phrases: “My work is about…” “I want to make…” “I am trying to….” By allowing such statements to pass, art schools give the impression that once students are out in the world, we’re going to be interested in them. No one has told them that we’re not interested in the slightest; we don’t care what they think, feel, or want to do. We see tons of stuff, all day, every day, and it’s their job to stand out from the crowd, to make us take notice whether we want to or not. I try to imagine a similar situation in another, more rigorous field—such as a filmmaker attempting to get backing by writing: “I want to make a film about….. Ever since I was a small child I’ve been fascinated by …...”

Fortunately, so we didn’t come off as total curmudgeons, there was one statement that not only piqued our interest, but shed light on the artist’s obliquely rendered subject matter:

My flight is at 10:00 in the morning, which is good because I can wake up at 6:00, catch the trolley by 6:45, then catch the train to the airport, and hopefully be there by 8:30. If the flight were earlier then I’d have to find a friend to drive me because public transit doesn’t start until 5 and it takes about 2 or 3 hours to get there. I have to remember to bring my phone charger. When I wake up I have to put it in my bag. I have to make sure everything I need can fit into a carry on bag, I can’t afford to check it and they ALWAYS lose my bag. A friend of mine checked his bag and they lost it for months, he had to call them everyday about it until they paid him some money. I have to make sure the machines can see everything that is in my bag and on me. I can’t have too many clothes. One pair of pants only. I don’t have to pack my jacket I can wear it even though its too warm. I can’t have too much change or metal stuff in my pocket because it will take too long to empty my pockets before I go through the metal detectors. I seem to always think I have to take my money out of my pockets. I haven’t shaved in a while I wonder if they’ll search me, I hope I don’t miss my flight. I have to make sure I fill my water bottle up when I get there and not before. This one time they changed me to another flight that was already boarding in a different terminal, but to get there I had to go through security again, but my water bottle was full, so they made me go empty it and wait in line again. I had to run to catch the plane. I’ve never connected where it was landing before. I hope they over booked the flight. I’ll volunteer for a free round trip. (Jordan Graw) 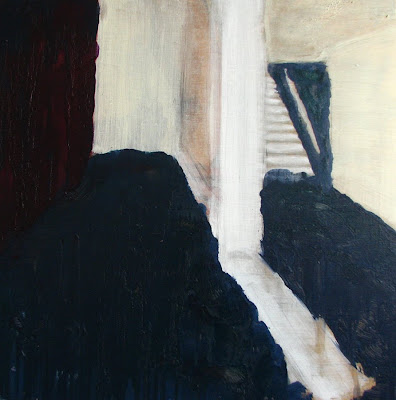 The panel was initially proposed by PAFA faculty member and curator of the Arcadia University Art Gallery, Richard Torchia, who told me that the students, to their credit, forwent having a catalog in order to fund this event. There were no prizes involved, just the honor of being chosen. Although we were almost, but not quite, as straightforward as we’d be in a closed panel, the students took it well, and afterward we all went out for drinks.
Artists' Statements, Art Schools, PAFA, Art rhetoric, Art jury
Comments (11)