Painting by Su Xinping, courtesy Stux Gallery. I used this in an earlier post and don't know if it's a Chinese guy going up or a white guy going down, but it seems to illustrate the moment.
"Holy shit," son Matt writes in an email this morning, "this New York Times piece by Roger Cohen ['It's the end of the era of the white man'] so captures what I experienced in China." As well as what I felt after hearing about his trip, perusing Chinese art in Chelsea, visiting the Asian Art Fair, and doing research on Chinese artists for TIME. So when I read David Brook's column in December about how the Chinese with their dictatorship can't possible compete with us culturally and creatively I thought, "You ninny, it's already over." And here we are in the academic bubble that is our art world, rehashing ideas that were invented by white guys over almost half a century ago. Pul-lease.
Chinese art
Comments (1)

It's really all Chinese

December 9, 2007
The weird thing was that after seeing so much Chinese art at the beginning of my Chelsea tour (see "It's all Chinese" below), everything else began to look Chinese too. Ross Bleckner’s Chinese red flower swirls: 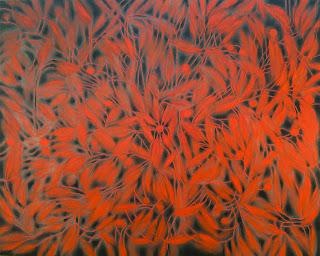 Cy Twombly’s splash blossoms, also Chinese red, were like blown-up brush paintings, and I'm amazed that I never before made the association between Pat Steir’s drip paintings and Oriental screens: 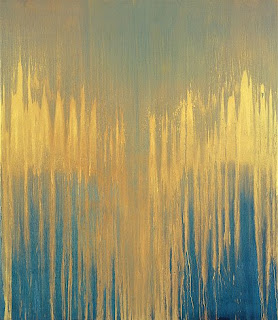 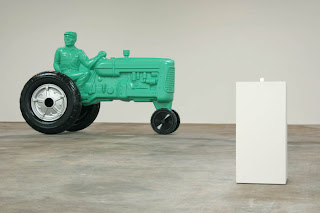 Su Xinping (Stux)
This week, pounding the sidewalks of Chelsea, it became more and more evident that the Chinese takeover of the art world is complete. First stop was the group show at the vast Arario Gallery (521 West 21st with three other branches are in Korea and Beijing) followed by another across the street at Stux. While there’s no means of presentation here that’s particularly new—the Asians are riffing on Western contemporary art in a big way—it’s oddly refreshing. They bring, however, more than just exotica to the mix. While Westerners appreciate traditional Asian painting and sculpture for its beauty, at the same time it's opaque, a foreign language. By adopting Western tropes, these younger Asian artists are working with a visual code we understand, and one that allows their personal sensibilities to shine through. In writing classes I taught in the graduate program at SVA, where many of the students are Asian, I made a practice of encouraging foreign students to forget about using correct grammar and simply concentrate on expressing their thoughts and feelings. The results were charming and illuminating—and because of their heartfelt nature—surprisingly literary. The students told me they could express personal insights and observations in English that would be unimaginable within the confines and traditions of their native languages.

However the same Warholian and Duchampian ideas that the Asians find so liberating have been recycling in the West now for more than thirty years, to the point that they have become mechanical and rote. Pushed in art school to do work that looks “relevant,” students imitate what they see in galleries, which is work generated by artists who were imitating what they saw in galleries ten years before, which is work those artists saw in galleries ten years before that, so by now it’s all so denatured and watered down that it looks like the souvenir shop version of the original impulse.

Perhaps its time for us to take up brush painting.
Chinese art
Comments (0)