On de Kooning, Orozco, and Twombly…

October 19, 2011
I could not agree more with Roberta Smith’s strongly worded review of Gabriel Orozco’s show at Marian Goodman, which ended Saturday (note: the images look better online than they did in person). My thoughts exactly: a case of an artist who can do wonderful things (his drawings on money and tickets being some of my favorite artworks ever), churning out stuff for the marketplace to the point that I wonder if he even knows who he is anymore. But then you have to feel sorry for anyone who shows while de Kooning is on at MoMA, and has to stand up to the inevitable comparisons.

Willem de Kooning. Pink Angels. c. 1945. Oil and charcoal on canvas, 52 x 40" (132.1 x 101.6 cm). Frederick R. Weisman Art Foundation, Los Angeles. © 2011 The Willem de Kooning Foundation/Artists Rights Society (ARS), New York
I didn’t see how the de Kooning retrospective could live up to the hype but it did—it was energizing and inspiring, even though some of the selected pieces (especially from the artist’s late period) weren’t the best examples, not to to speak of the pedestrian installation. Is it really necessary to group all of the “woman” paintings together in a row? At MoMA, chronology wins out over aesthetics, as if we’re all art historians for whom it’s important to compare similar paintings side-by-side. Big square rooms, white walls, everything lined up in order…hey, it’s the 21st century! How about a little originality? And also is it necessary to show SO MUCH work at one time? I know that’s a silly question since the whole idea of a blockbuster is to cram in as much as possible—and to hell with selection. Why show three black –and-white paintings when you can get ten? The result, no matter how great the artist, can be overwhelm and overkill, and it’s to de Kooning’s credit that he survives it here.
I remember approaching the gigantic 2005

Willem de Kooning, Woman I, 1950-52. Oil on canvas, 6' 3 7/8" x 58" (192.7 x 147.3 cm). MoMA Purchase. © 2011 The Willem de Kooning Foundation / Artists Rights Society (ARS), New York
[Can we imagine Orozco choosing not to work for nine months?  Caring enough not to work for nine months?]
It’s impossible to look at de Kooning and not think of all the other artists (Pollock, Gorky, Kline, etc.) he was bouncing off of, who were working in similar ways, and to recognize how—when a group is working on the same idea, if separately—they push each other to outdo each other and develop it collectively. The downside is that the pressure to adhere to a movement or style can be very confining (I know this from personal experience, having been an abstract artist in Chicago where the Imagists held such sway that the only option was to move to New York)—however it made me think that the complete freedom we have today may be the one of the reasons so little truly great art is being produced.
Leaving the exhibition we walked down the stairs to the first floor where a massive Twombly was hung over the information desk, edge-to-edge scrawls of white crayon on a uniform gray ground. My friend and I had once shared an experience at the Clark Institute with one of Monet’s cathedral paintings, which started out appearing to be almost entirely abstract—but as we looked, the sun seemed to come out and illuminate the façade until we could see its sculptural detail clearly. Similarly here, gazing at the Twombly, the fairly regular, overall pattern of loops began to form themselves into clouds, and the painting took on the unexpected illusion of movement and depth. Gorgeous.
I’ve been back to the Clark since, wanting to see the Monet in the same way again, but it resisted. By now you’d think I would have learned the folly of trying to recreate peak experiences.

March 6, 2011
So many art fairs, so little art! Okay, I only went to the ADAA Art Show at the 67th Street Armory, Pulse, and the Independent…and that was enough to let me know I didn’t want to brave the crowds at the piers.  I always like the ADAA show because I see things of actual substance, and at Marian Goodman’s booth, a bunch of Gabriel Orozco’s delightful interventions on money and airline tickets (tiny, $35,000, and worth every penny) that knock my socks off whenever I’m lucky enough to see some.
The other two shows….arggh! I commented to a friend that it all looked like eighth grade, and he said worse, because eighth graders would be more adventuresome: here you can see the minds of the artists and the dealers at work, and it’s all very calculated. So many junky-looking watered-down versions of Rauschenberg’s brilliant Combines, which were made…wake up, art world!...OVER FIFTY YEARS AGO. Or stuff intending to be shocking when what, besides a David Wojnarowicz film from the 80s, could possibly be shocking—to adults, that is—in 2011? Then there was the plethora of paintings and sculptures decorated with glitter and sequins, as if glitter and sequins were the radical materials they might have been four decades ago.
However there is something that‘s truly radical for our times, and it is called development. For the uninitiated, this is when an artist finds a form and makes it his/her own to the point that it becomes new.  Try it!—but be warned, it might take more than five minutes.
Meanwhile I did, in recent weeks, see something that rang true—a drawing by Chuck Nanney at Invisible Exports on which is written: “Everything I do has been done before by a feminist in the seventies.”
Or Lucas Samaras, who did it all. 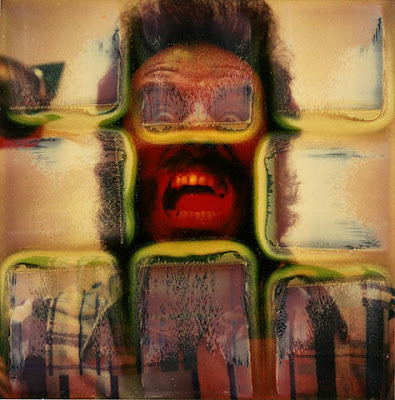 Post-Minimal to the Max

February 14, 2010
As a young artist, I thought for sure when I got older that new, unfamiliar art would come along to challenge my assumptions and beliefs. I even looked forward to it. But now that I’m old enough to be a fogey, I see stuff like Tino Sehgal at the Guggenheim and instead I’m thinking, “OMG, this again? I have SO seen this, done that.”
I wonder how many more generations I will have to watch discover conceptual art, each time becoming more sterilized, more schooled.

The funniest is art that tries to shock. Sorry, but now things are reversed; it’s the younger generation that’s been coddled and the older one that has done more, seen more, and put more substances up their collective noses than the young ‘uns can imagine. Ours is the generation that produced Robert Mapplethorpe, for chrissake, who saw Nancy Spungen’s body carried out of the Chelsea Hotel, and needing to pee at Danceteria, found people fucking in the stalls--not to speak of having friends dying left and right from AIDS. So I’m going to quake inside when I see a (clothed) black man laying on top of a (clothed) white woman on the floor of the Guggenheim?

Roberta Smith, however, says it better, in “Post-Minimal to the Max” in Friday’s Times:

The current exhibition of Gabriel Orozco at the Museum of Modern Art along with the recent ones of Roni Horn at the Whitney Museum and of Urs Fischer at the New Museum have generated a lot of comment pro and con. So has the Tino Sehgal performance exhibition now on view in an otherwise emptied-out Guggenheim rotunda. But regardless of what you think about these artists individually, their shows share a visual austerity and coolness of temperature that are dispiritingly one-note. After encountering so many bare walls and open spaces, after examining so many amalgams of photography, altered objects, seductive materials and Conceptual puzzles awaiting deciphering, I started to feel as if it were all part of a big-box chain featuring only one brand. More…

The artists Smith would choose to feature are not necessarily those that populate my curatorial fantasies (for instance I’d start with Terry Winters, whose last New York museum exhibition was in 1992) but not to quibble. Smith sums it up when she says, “What’s missing is art that seems made by one person out of intense personal necessity, often by hand.”

Certain readers will take this as meaning that Smith is angling for a return to AbEx or somesuch, but I’ll interpret it my way. Readers of this blog know that I admire the work of Olafur Eliasson, who works with a team of collaborators and rarely executes anything himself, yet the aura of “intense personal necessity” surrounds everything he produces. It is also very highly developed. On the other hand, given how much art one sees that seems only half-realized, it’s important to recognize that process itself—the struggle to execute—can be an important path to new ideas. The stubborn development of technique (and by this I mean not facility, but the ideal vehicle for the concept) can provide the time required to take the art where it needs to go.

Also to say that while I find Tino Sehgal's work mannered and superficial, I'm inspired by that of Marina Abramovic (actually this is a prime example of the watering down process I was speaking of, where one generation adopts the look, but not the substance, of the previous one), and will expound on this in later posts. 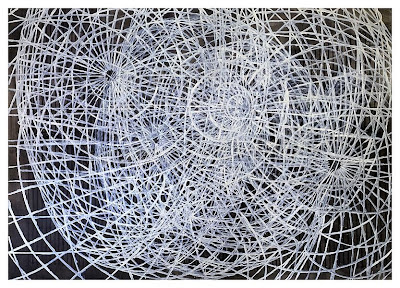 If, after the Orozco show, you want to indulge your senses in a retrograde manner, hop on over to the same place we first saw those Dannon lids, the Marian Goodman Gallery, and wallow in Gerhard Richter’s gorgeous scraped abstractions, up through January 9th.

What I wrote below sounded so negative, I wanted to amend it. I don’t want to discount Orozco because, while I find his much of his “conceptual” work tedious, I’m completely inspired by his drawings, small paintings, and collages. It’s just that these are regarded as ephemera rather than the real deal, when I think they are the real deal. Again, this isn’t an argument for painting and drawing over conceptual art, but for Orozco’s painting and drawing over his conceptual art, much of which, for me, falls into a genre Jerry Saltz has written about and Roberta Smith has aptly coined “Curator's Art” (whether or not they’d include Orozco, I don’t know). Asked about the Urs Fischer survey in the comments to the post below, while I find some of his work intriguing, Fischer lost my respect with the hole in the wall that, when you get too close, sticks a tongue out at you. In my book, not only is it just too easy, it sends the same message as Orozco’s shoebox: that museum visitors are idiots and deserve to be treated as such.

To show how undervalued (I'm not talking money here) Orozco’s graphic work is, I can’t even find examples on the Web of the pieces I love best. The overused image above will have to do.
Conceptual Art, Jerry Saltz, Painting, Gabriel Orozco, MoMA, Curator Art
Comments (3)

What is most important is not so much what people see in the gallery or the museum, but what people see after looking at these things, how they confront reality again.
–Gabriel Orozco.

Some artists would be better off wthout retrospectives. Coming across