August 18, 2012
I received this remembrance of Herb Vogel by email from Lucio Pozzi. The Vogels, who I’d known for some time, introduced me to Lucio back in the early 90’s, when I ran into them all having lunch at Jerry’s Restaurant in SoHo. Since then Lucio has been a friend and important figure in my life. In 2008 I posted Lucio's memories of art dealer John Weber, along with this watercolor, one of my favorites:

Lucio Pozzi, Barbardos, 11 January 1972, watercolor on paper, 11.5 x 23.1"
For a few years I lived under a giant skylight in a windowless, basement level, nineteenth century former police truck repair garage on Mulberry Street. There, the city was far away. I slept on a convertible couch or, during my daughter's visiting nights, she on the bed and I on a futon on the floor.
>     Certain summer afternoons Herbie would ring my bell, unannounced. He was wearing checkered shorts, an old pair of sandals and a light non-descript shirt. Despite his having undergone skin cancer surgery a few times on his face, he never wore a hat. With his left hand he would carry a translucent plastic bag full of water in which swam a few rare fishes picked up in the store a block away from me. With his right he held a large paper shopping bag containing a couple of wrapped rectangular works of art. The Uptown subway stop was around the corner.
>     He knew he had to wait for me to run up the ramp to open the door. The familiarity of our greetings were as precious as the years of our friendship and collaboration. No hugs, shouts or laughter, just a glass of water, and the tangible pleasure of sitting around the worktable, plain talk about family and then words about the art of other artists and mine. When theoretical considerations would arise, Herbie was very quick in situating them in simple words in the history of contemporary discourse. Nothing escaped his passionate attention.
>     It was hopeless on my part to ask whom the works in the bag were by or to see them. Only once he showed me a half-dozen drawings by Joseph Beuys he was particularly proud of having secured.
>     On my walls he could see the many ventures I was engaged in - perhaps on the left a large oil painting containing human figures, in the center some plywood geometric polychrome acrylic cutouts, to the right a photograph mounted on tinted canvas. On a nearby table there could have been a landscape watercolor and a dotted gouache texture on paper.
>     His quick eye wandered in the space while chatting, like a fox exploring the night. He would then have me open the flat files of recent works on paper. When a group attracted his attention he took it all. Occasionally he also chose a small piece on canvas or on wood.
>     Sometimes I disagreed about the relevance or quality of what he chose. His respect for the artist had him listen with grace, but we often ended up by his taking what he wanted and me adding what I preferred. Now that the works he had selected are shown to me by the museums that acquired them, I am stunned by how his eye and mind saw beyond my perception of my own work. I would say he was always right. As evening approached he would exit wearing a faint smile, that of a cat who had just savored a good fish meal. And I was left energized.
>     The art would have to fit the shopping bag, or if too large I would deliver it at home. On those occasions he and Dorothy either offered me an Entenmann's cake and tea or, especially after walking had become difficult for Herbie, I would be invited at the diner across the street. He was very particular about food. Never salad, no wine, yes to chopped chicken liver and ice cream.
>     Often Dorothy also came to the studio, but on those occasions the visit would be arranged ahead of time. We would dine in my neighborhood. Dorothy shared with her husband a fastidious concern for the correct handling of the artworks. She also is extremely thorough in cataloguing the collection. While looking at art, her comments would be drier than his, always very pragmatic, to the point, no flattery, few words being better than many. The discussions preceding their final agreement on what was being seen enhanced the conversations.--Lucio Pozzi

June 2, 2008
Robert C. Morgan wrote this in response to Lucio Pozzi’s letter (in my last post):

It has been said that [John] exhibited works by Hans Haacke six times before anything sold, and nearly the same for Daniel Buren. Such loyalty to noncommercial artists is unheard of in today clamoring marketplace, but much to John's credit that he was willing to stand by these highly acclaimed artists….His loyalty to those he believed in was central to his character.

John was a kind of old-style European gallerist, who understood connoisseurship and the value of art apart from money. While one might argue that in the end, this may not have worked in his favor, one cannot deny his strength of character, his core of understanding art through feeling, and his sincerity in championing artists he believed in, many of whom transformed the history of contemporary art.

It’s sad that someone who had such an influence should have been forgotten at the end of his life. When John curated the local show I was in, it seemed to me that some of the people associated with the gallery were clueless about his contribution, treating him like just some old guy. Yet we would never have understood the value of the artists Weber promoted had he not gathered them in one place and been so steadfast in his support. Critics such as Rosenberg and Greenberg are alive in the histories, but the role of art dealers in forming what we know as contemporary art goes largely unrecorded. John was among those who had a talent for spotting art that might otherwise been overlooked and were willing to nurture it until the rest of the world took notice.

Lucio Pozzi:
Barbardos, 11 January 1972, watercolor on paper, 11.5 x 23.1"
NY State, 1971, watercolor on paper, 8.7 x 15.5"
-
Three years ago, John included my work in an exhibition he curated at a local gallery of artists, including Kelly and Artschwager, who had moved their studios from New York to the Hudson River Valley area, and it was inspiring to be in the company of such early heroes.
* * *
John represented me in his gallery for more than twenty years. His loyalty to the artists he worked with was sustained through the vagaries of the market and the changing fortunes of art. He was one of the great forces enlivening the artistic culture of the second half of the Twentieth Century. Having trained first at the Dayton Institute of Art, he started working at the Martha Jackson Gallery and then moved to the Dwan Galley in New York until, after the closing of the latter, he opened a gallery in his own name. He believed that a gallery owner could not only exhibit art but should also participate in the formation of artistic discourse. The influence of Sol Lewitt was absorbed by him in terms of always relying not on mere visuality but also on visual language and context. Hearing John lecture, especially about art of the sixties and seventies, was an experience of consideration and scholarly depth.
-
His gallery was the training ground for innumerable dealers and curators, among them Angela Westwater, Jeffrey Deitch, Amy Baker Sandback, Susanna Singer, Naomi Spector. Several younger dealers and curators in the US and Europe have told me how they still now learn from his approach to the art of his times. His yearly Summer Invitational exhibition inevitably raised controversy because he exhibited art that often contradicted the very canons of the regular artists of his gallery. He had guts of a kind that few now allow themselves to have. The list of artists who found in his gallery the springboard for their career is too long to enumerate. What was exceptional was how he continued to exhibit them even when their market was in a lull. He stubbornly defended what they were doing, and lost money in exhibiting them, because he was convinced of their thought and practice. I remember how many times I objected to some of the art he showed and with how much patience and insistence he would try to convince me to change my mind.
-
John was both a rationalist and a romantic. The contradictions of his character ran deep into his soul. Raised virtually as an orphan he had no sponsors funding his gallery. He was generous but also was able to hurt himself and others. In matters of money and policy he often shot himself in the foot, losing important allies for trivial reasons. John risked greatly on an idea but then managed to diminish its potential by stranding himself almost as if by distraction in its practical implementation. Or else he would panic about a financial mishap and twist and turn it as if survival was at stake. Some people had no patience with this and lost sight of the grandeur of his vision and how he nonetheless acted as one of the few great prompters of visual culture.
-
He has died in a very modest apartment in Hudson NY, practically a pauper, supported by family and charitable friends, surrounded by some of the art of his past. Always running after debts and organizational problems, he had never managed to assemble the collection he had dreamed of. During the last years he had emphysema and walked around carrying his oxygen tank on the back to allow himself to breathe. His eyesight was failing but he found the energy until the very last to curate some exceptional shows of unexpected art in the Hudson area and in the city. Two years ago, he came to visit my studio in Hudson. It was a mess because I had moved so much stuff there and had found no time to rearrange it. In a pile, he saw a little painting of a few years ago, made of subtle low contrast values, thus not easily decipherable by a weakened eye. He stunned me by identifying it and remembering exactly when it was made and exhibited.
-
He appeared at my last exhibition at BCB Art in Hudson, smiling his charming smile and friendly and attentive as always, despite the effort it must have cost him to come to the gallery. Last month, I interviewed him briefly to write a short article about him for an Italian magazine, knowing how proud he was to have been to the first to present artists from that country who then had proceeded to great appreciation by the artworld. He couldn't get up from the bed, but managed to answer brilliantly to all my questions.
Farewell, Johnny boy.
Lucio Pozzi 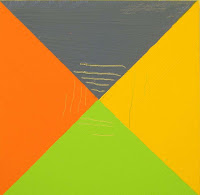