November 27, 2007
From a comment (thank you!) under my post below, “Light Fantastic” about Jenny Holzer’s projection piece at Mass MoCA, I learned that you can access a live feed from it here, which is very cool. And before you go see the actual piece, you might want to check that site, because last weekend friends made the trip from Catskill, NY, only to find out that it wasn’t working that day.
Mass MoCA, Jenny Holzer
Comments (0)

November 18, 2007
In the post below about Jenny Holzer, I noted that the artist underwrote some of the costs of the exhibition, which on the face of it seems laudatory and in this case, where Mass MoCA was brought up short by the Buchel debacle, it no doubt is. However what kind of precedent does it set? An article in the New York Times today, entitled "Museums Solicit Dealers’ Largess," focuses on the now common practice of galleries contributing to the exhibition costs of publicly funded museums when their artists are featured, yet another example of commerce having an influence on the art we see.
Mass MoCA, Jenny Holzer, Art Market
Comments (0)

November 18, 2007
An unexpected outcome of the Buchel debacle (say “Buchel debacle” ten times) at Mass MoCA, is that the institution now has the best exhibition in its decade-long history: Jenny Holzer’s first interior light projection project in the U.S. Entitled, appropriately, Projections, it'll be on view for nearly a year. Director Joe Thompson told us last night at the opening that Holzer called and asked, “Is there anything I can do to help?” volunteering to step in and even offering to cover the cost of very expensive projection equipment--with lamps so bright, Thompson said, that they could even project on the mountains that surround the museum. Here Holzer's signature light projections fill Mass MoCA's humongous main gallery, playing over walls, ceilings, floors and visitors, who can flop on giant grey beanbags and take it all in. When the art world was small, it was possible for artists to see everything of importance and react to it in one way or another. Now that it’s global and dispersed, no one can see everything and we’re going in a million different directions at once. That could be good—who knows?—but it limits the conversation. Therefore I think works such as this, which can be experienced by thousands, or even millions, of people, are the most significant for our culture--and this is the most exciting I’ve seen since Christo and Jeanne-Claude’s The Gates and Olafur Eliasson’s Weather Project at the Tate Modern. 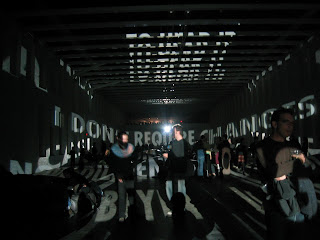 October 22, 2007
Friday night Scott and I drove through the rain to the opening of the Anselm Kiefer exhibition at Mass MoCA. Of course, in the official remarks, as with the Serras, the talk was about how big and heavy everything is, and how hard the show was to install. Compared to the rest of modern life where dams and skyscrapers are built and we take for granted that most accomplishments require work, any kind of effort in the art world is made out to be a big deal. However among the overweight and oversize pieces is a painting (around 9’ x 24’) in the first gallery that’s truly magnificent—a charred landscape entitled Aperiatur Terra Germinet Salvatorum, it makes good use of Kiefer’s predilection for a crowded rush to the vanishing point at the horizon line—until you turn a corner into the other gallery and see three more that are almost identical. With each iteration, the paintings’ overall power and presence is diminished to the point that they, sadly, nearly cancel each other out.

Kiefer stayed in Germany as a form of political protest, refusing to enter the United States while Iraq War continues as, it was noted in the remarks, his mentor, Joseph Beuys, would not travel here during the Vietnam War.

Then yesterday Roberto took me to see a film at the Chatham (NY) film festival, about Ellsworth Kelly, a nearby resident, who goes about art and life with such ease, sureness, elegance, and restraint that it makes a lot of other art look like so much huffing and puffing. With the exception of the Maysles documentaries about Christo and Jeanne-Claude, I usually find films about artists annoying, as they are often made with an exaggerated sense of awe. But this film, even though conventionally conceived and therefore dotted with commentary by the usual art world talking heads, is quite moving, and conveys enormous insight into Kelly and his work. It shows his process as non-theoretical, purely intuitive, and his intention as—his word, and one Kiefer would no doubt also employ—spiritual. Kelly is where I started as a young artist, the subject of the first art book I ever bought. Later, in one of my little-known side jobs, producing photographs for print ads for Vitra where I got famous people to sit in famous chairs, the photographer, Christian Coigny, and I traveled to Kelly’s airplane hanger-like studio in Spencertown. Kelly was most gracious, taking me on a tour of his studio, showing me the model for his upcoming retrospective at the Guggenheim as well as treasures accumulated over the years—I have a vivid memory of a beautiful, small triangular drawing he bought from Agnes Martin in the early days to help her get by—before taking us to lunch. Seeing the film caused me think about my early ambitions for art, how important it was/is to me for it to be life affirming and enhancing. If I’m going to bring a new image into the world, let it be one that makes it a better place. Kelly did not attend the premiere because he was “in his studio painting” as the presenter put it, and my guess is that at 84, he has no need for any more fuss being made over him.

Kelly, by the way, is one artist who's made some great green paintings:

May 27, 2007
Last night I went to Mass MoCA for the opening of the Spencer Finch exhibition, which will be up into 2008. It was a pleasure to discover an artist whose work I hadn’t seen before--and actually like the work, enjoy being there, and not be terrified that I’m going to meet the artist/curator and have to say something polite. It’s good I’m not a full-time critic because I really don’t like that much art, and full-time critics have to like a lot of art. I want art to be special. When I see art like that it’s exhilarating, makes me want to stay up all night. And then there was this little beauty with a sketchbook and pencil, lying on the floor under the cellophane piece, drawing without looking at the paper: 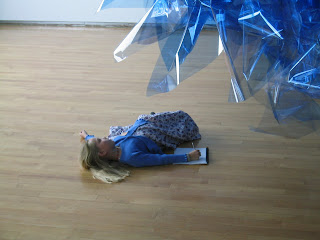