Andy Warhol, Dollar Sign, 1982
©The Andy Warhol Museum, Pittsburgh. Founding Collection, Contribution The Andy Warhol Foundation for the Visual Arts, Inc
Jerry Saltzon Facebook, yesterday:
We now have this enormous top-heavy operational apparatus… a hundred art fairs and international biennials, galleries growing larger as artists work in smaller spaces, skyrocketing prices during a worldwide economic contraction. The art world’s reflexes are shot; its systems so predetermined that they’re driving us; we’re no longer driving them. The system is less susceptible to paradox, discovery, ambiguity, and all the exquisite deviations and orphic oddness that brought us to art in the first place.
….The system may be too big NOT to fail. It is telling us what we already know: A crystal is cracked. It is time for mutinies, forging new topographies and plotting other courses."
Artists are famous for pioneering new territory, making places like SoHo, TriBeCa, Williamsburg, etc. so attractive that they’re driven out by the moneyed interests. However now it’s bigger than that; while we were sleeping, they co-opted the entire art world and made it one big hedge fund.
In Chicago last week, a collector friend asked me what’s going on in art, what’s good, what’s happening, and I couldn’t begin to answer him. What’s good? From whose point of view? Mine? Gagosian’s? Sotheby’s? And does it matter? The machine that is the art world is going to run regardless of whether I, Saltz, or anyone who really thinks about art, finds it important. As in current politics, the truth is meaningless and history never happened. So what if another artist did the same thing better yesterday or ten years ago, or is doing it better now in some loft in Cleveland. Like everything else, when things become corporatized, the emphasis changes; it’s no longer about building a better mousetrap, but how many mousetraps can we sell?
Back in the day, the value of contemporary art was determined by an intangible, but nonetheless fairly reliable, aesthetic consensus of artists, writers, inspired dealers, curators, and collectors crazy enough to spend money on the art they loved—with no prospect of a return, as the secondary market was reserved for dead artists. Now value is determined by how long you can keep the ball (or “spot” in the case of Damien Hirst) in the air. Other than generators of product, artists aren’t part of the game. Nor are critics, whose insistence on analyzing and qualifying is beginning to appear superfluous at best, and at worst, downright annoying.
How great is the divide? Example: Richard Prince’s work sells for millions, yet not one artist of my acquaintance cared enough to see his 2007 Guggenheim retrospective (I did, but only because my press pass got me in for free), and Peter Schjeldahl wrote of him: “An adept of juvenile sarcasm, like Prince, is well advised not to invite comparisons with grownups.”
Often compared to the tulip craze that took over Holland in the 1600s, one wonders if the speculative art bubble will burst once investors find it's filled with hot air, when the tide turns from Hirst, Prince and Koons to….? (Whatever happened to those Chinese artists who were so hot a few years ago?) Even the seemingly grounded market in Warhols could be upset when the Andy Warhol Foundation (whose Creative Capital grant is supporting this blog) disperses its collection.
What could unravel even sooner is the art school pyramid. For a couple of decades, students have been willing to take on loans of $20,000 to $30,000 a year to get a degree that would supposedly net them a tenure track teaching position worth upwards of $50,000 a year. Now, however, that 75% of those jobs are being filled by adjuncts making an average of $2700 per course, with many, like Walmart employees, having to rely on food stamps, it seems unlikely that academia will maintain its appeal for long.
Meanwhile, what’s an artist to do? Saltz says it: mutiny, forge other topographies, plot other courses…in other words, make history once again. Think the Salon des Refuses, the Bauhaus, Black Mountain College, New York’s Downtown Scenein the 80s….This is not the first time artists have had to take things into their own hands—and they will.
***
An addendum, following the comments of friends on Facebook, some of whom found merit in Prince and Koons, although I'm glad to say no one defended Hirst. That, however, is not the point. While I have no interest in Prince, I do like some Koons, and I adore Richter, who is a daily inspiration and, for me, completely deserving of his fame. However, outside of seminal historic pieces, to assess ANY work of art, even Richter’s, at millions of dollars, or even a million, is to indulge in pure speculation. No longer engaged in questions of artistic merit, every institution, from museums to art magazines, is swept up in this wild game of chance being played out by people with too much money. There were probably some pretty gorgeous tulips during the tulip craze, which is no doubt what set the whole thing off, but what happened ultimately had nothing to do with tulips.
Art Schools, Peter Schjeldahl, Jerry Saltz, Creative Capital, Andy Warhol, Art trends, Art Market, Art Criticism, Richard Prince
Comments (16)

What did you think of the Richard Prince show?

It was a one-liner.

Now I’d like to know what you thought. I see it as an opportunity to test how much the powers that be in the art world actually represent us. Write a review in the Comments, Amazon-style, with one to five stars, and your evaluation, such as “It was great! It sucked!” and then—the most important part—why. It can be as long or short as you want, and you can use your name, a nickname, or be anonymous. I also hope you'll identify your relationship to the art world—artist, curator, writer, teacher, arts administrator, student, gallerist (horrible word—I prefer “gallerista” or “galleristo” myself), observer or whatever. And I’ve noticed how, on Amazon, not having read the book often doesn’t deter people from reviewing it. Same here; if you're an art-interested New Yorker and didn’t get there—after all, it was up for a third of a year--your reason for skipping/avoiding/forgetting it is valid because I’m not sure we get a true picture if we only query only those who were interested enough to go.

Make sure your comment registers and that you see the “Your comment has been saved” banner. If not, type in the code words and click again.

And feel free to pass this on to students, friends, whomever, anyone you think would like to weigh in. 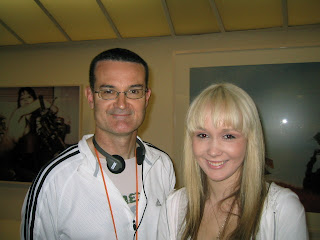 And this family from Croatia. Either they're the coolest people in Croatia or everyone there is cool: