Looking for art in all the wrong places

March 10, 2010
A friend recently experienced culture shock, coming back from a month of meditation in India and going to the Armory Show at the piers while still jet-lagged. “There’s such a contrast between the vital, natural, creative impulse that is India, and the intellectual constraint of Western art, “she said. “There the creative, intellectual, and spiritual are all of a piece, where here we tease them apart. Indian art is raw; Western European art is processed, an intellectual product.”

I haven’t been to India, but I have been to Egypt, where the soft pastels of the clothing and painted clay houses, the graceful sails of the feluccas on the Nile, were one with the sandy, palm-treed landscape, each vista more breathtaking than the last, every aspect harmonious. The way the shopkeepers in the Aswan market laid out their wares was as artful as any installation I’d ever seen. Beauty seemed as natural as breathing.

And beauty, I’m convinced, is as necessary to healthy life as clean air, water, and food, yet we in the West pretend that it’s a luxury. The only way we acknowledge beauty’s importance is by punishing criminals by depriving them of it. Prison wouldn’t be prison if cells had brightly colored walls and inmates wore attractive uniforms— “Jil Sander for Attica" would not fly.

Even the environments we create for people to live and work in (and supposedly get well in, just look at our hospitals—we won’t even speak of the food) are equally aesthetically barren. Every time I drive through mall heaven in the towns outside Boston, or on Long Island or…anywhere, I go into shock.

So back at the piers, there’s an inescapable irony in paying $30 to look at art—try to find beauty—in the most inhospitable of situations: crowded, hot, claustrophobic, everything squished in. Another friend says she likes Ikea better—“at least they give you a green line to follow.”

Meanwhile, a real armory on Park Avenue, intended for storing military equipment and built at a time (1861) when beauty was still a priority, makes a much better backdrop for art, which is why I prefer the ADAA (Art Dealers Association of America) Art Show, this year concurrent with the ones at the piers. Not edgy, you say? Okay with me. At least I can breathe.

…and visit with John Kelly, who’s artist-in-residence in this lavishly decorated monument to war that’s being turned into an alternative art space. Dancer, singer, actor, writer, painter (my review of his recent show at Alexander Gray was in the November Art in America), John is one of the most charismatic performers ever, the proof being that he can make even cabaret (a musical genre I loathe, right up there with musical theater) into a thrilling experience. I’m such a fan! John will be channeling Joni Mitchell in performance in Usdan Gallery at Bennington College at 9:00 this Friday evening.

However if the backdrop makes the art, it does not make the music. Forgoing dinner with friends, I had high hopes for Animal Collective and Danny Berger in the rotunda at the Guggenheim last Thursday, but hardly the “kinetic, psychedelic environment” promised by the press release, it turned out to be totally anemic. It’s as if they weren’t even trying. I, like others, expected a concert, but instead it was arty computerized electronic plinking that could barely be heard over the conversations of the milling crowd, who also rarely glanced up at Berger’s vapid projections. Unlike Jenny Holzer’s project last year on the exterior of the building, it was a great opportunity, piddled away. (Vanity Fair agrees.)

My desire for sound and light, however, was more than satisfied the next night, when I bought a single ticket to hear Muse and the Silversun Pickups (who you must know by now are my favorite band) at that most unaesthetic of venues, Madison Square Garden. No doubt the show cost a gazillion dollars and took months to prepare—and Muse is definitely OTT, no subtlety there—but I was primed. It wasn’t Art, so they had to deliver. At the end I was getting hugs from sweaty, 20-year-old guys (“You like Muse? Let me give you a hug!). Totally worth it
Muse at Madison Square Garden 3/5/10
Silversun Pickups, Animal Collective, Keltie Ferris, Jenny Holzer, Armory Show, music, Muse, John Kelly
Comments (2)

November 25, 2009
While I’m waiting for my friend Richard to call so I can post the best Facebook story ever, can we talk about apps? I’m always wary of writing about this stuff because I figure half of everybody already knows it all, and those who don’t, don’t care. I won’t bore you with the long story of how music technology challenged I’ve been for three years since moving into this house, but the short story is that I had it totally wired for sound at great expense—by a very sweet guy, a coke-head who up and split town leaving a bunch of tangled wires in his wake—and no matter how many experts I’ve employed, I have not been able to get streaming radio to work properly. And as far as I’m concerned, life without streaming radio is not worth living. Well that may or may not have been fixed today, but before my latest tech guru came over, I was leafing through New York magazine at breakfast, and learned that I could circumvent my computer with a free Pandora app for my iPhone. I instantly downloaded it, plugged it into my stereo, and viola! endless wonderful music. My only complaint, and it is small, is that having ascertained my alt rock bent (Radiohead, Pixies, Silversun Pickups) it plays an excess of Death Cab for Cutie (which I don’t really mind, but enough is enough) however I’m confident that with adequate training, it will get over it. Whew!

So I’ve been happily dancing and singing along in the kitchen tonight, preparing my wild rice contribution to my friends’ annual pot luck, and hope everyone has a thankful Thanksgiving.
Silversun Pickups, Facebook, music, Radiohead
Comments (2) 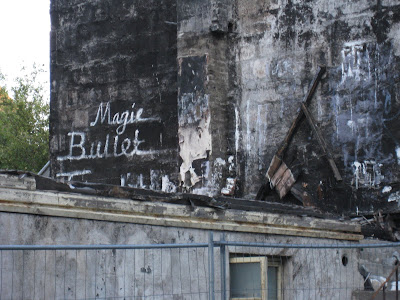