July 14, 2007
Roberto said he thought my post on Neo Rauch was…um, abrupt, while Lise labeled it “snarky.” Good! It was my way of expressing total exhaustion with rampant hype and mediocrity—and a simple counterpoint to the link I provided to Roberta Smith’s thorough and extremely intelligent review in the Times. However after being pressed by Roberto to further analyze my antipathy, I’ll say that Rauch’s painting application isn’t interesting enough on its own to engage me, and the subject matter is the same obscure nuance-free semi-apocalyptic story told over and over again, which is about as exciting as being cornered by someone who insists on recounting his dream to you in minute detail.…and then it was winter and the soldier was trudging through the snow with an artist’s palette that turned into a snake and then businessmen in green coats with hockey sticks were flying through the air and a man came walking by with casts on his legs except they weren’t casts but giant tongue-depressors and before we could barbecue the bear the volcano erupted and, oh, I didn’t tell you about how I opened my suitcase and it was full of bones and…and…” See? You’re already asleep.
Neo Rauch
Comments (0)

July 10, 2007
One evening in Berlin, Einstein and his wife were at a dinner party when a guest expressed a belief in astrology. Einstein ridiculed the notion as pure superstition.

How scientific is that, I wonder, to hold a strong opinion about something with which you’ve had no direct experience? From Einstein, yet. But that’s modern science: if it doesn’t fit the paradigms they've made up, then it can’t be possible. Hence the medical profession’s skepticism about homeopathy and acupuncture, and why it chooses to forget that Jung used astrology in his practice. During Nixon’s trip to China in the seventies, photographers sent back images from China showing patients with needles stuck in them smiling and waving during surgery. Did it change the practice of anesthesia? Not a bit. And then there are those people who, on the basis of no empirical evidence whatsoever, apparently believe that hot air blown from a machine actually dries your hands.
Einstein
Comments (0)

Photo: Carol Diehl, Iceland, 2006
When I wrote the post below, I assumed that the siding on the house inside the dome was not wood but metal, like that on so many of the houses in Iceland where wood is scarce. Einar wrote to correct me, adding this bit of Icelandic humor: "What do you do when you get lost in the Icelandic woods? Stand up."
Iceland, Einar Thorsteinn
Comments (0) 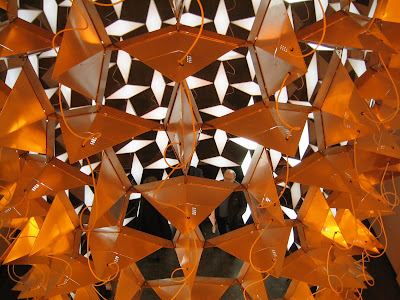 Neo Rauch at the Met

July 2, 2007
I have absolutely no opinion about Neo Rauch, which is unusual because I have opinions about everything. I don't feel my life has been particularly enhanced by seeing this exhibition, nor do I sense any negative impact. I found it kind of boring, but did not resent the time it put between me and lunch. The ceilings in the gallery were way too low, though.
Neo Rauch
Comments (0)

From an anonymous contributor.
Comments (0)

June 27, 2007
My father was an engineer who was also an inspired photographer, but he had too little confidence and was not in the right milieu to realize himself in the artistic arena. It’s always been clear that my brother got the engineering genes while I got the artistic ones. If you consider our family, the article that recently came out in the Times about how first children are smarter and more dutiful is bullshit; my brother, younger, is much smarter and has led a much more normal (“responsible” is the word our parents would have used) life than I have. He always excelled in school, whereas I failed algebra and had to take a remedial class where I was the only girl in a roomful of hoods (at New Trier High School we pronounced that “hoooods” to rhyme with “dudes”). I got 900-something on my verbal SATs and 350 in math. The administration thought there could be a mistake. I knew there wasn’t.

If you asked my father to explain something, like “How does television work?” he’d give an interminable explanation accompanied by an elegant diagram drawn on one of the yellow pads that were always at hand. I was much more into the diagrams than the explanations, but my brother took everything in and ended up designing computers for IBM (a sign in his office read, “My job is so complicated even I don’t know what I do”) and now creates aerial surveillance software for the City of Tucson, complete with Web cams, which means he really is Big Brother.

This is a long way of getting back to the subject of “thought experiments,” which Walter Isaacson, whose book I’m reading about Einstein, has finally explained on page 138:

The result was an elegant conclusion: mass and energy are different manifestations of the same thing. There is a fundamental interchangeability between the two. As he put it in his paper, “The mass of a body is a measure of its energy content.”

Thus: energy equals mass times the square of the speed of light.

It makes me want to study physics. Almost.
Einstein
Comments (0)

June 25, 2007
Ever since I’ve known her—a long time—my friend, Alexandra, has wanted a Saarinen Womb Chair, the chair she grew up with, grew up in, as she puts it—and I’ve always had trouble picturing this icon of modern design in Alexandra’s house, a profusion of pillows, overstuffed couches, art, artifacts from her travels, lap blankets, lap dogs, and so on. Each time I go there I come back feeling that my environment, with its uncluttered surfaces, leather and chrome is too ascetic—and Alexandra says that after visiting me she’s overwhelmed with the desire to go home and throw everything out. Well yesterday I went to see her and there it was, the Womb Chair, in her living room next to the colonial fireplace. And, as you can see, it fits in perfectly. I wonder if Saarinen anticipated needlepoint bunnies. 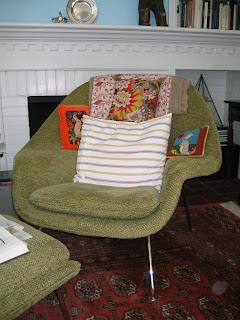