I took these the other day at a rest stop on the Mass Pike heading toward Boston. People frequently try to make artificial plants look real, but I'd never seen a garden where real plants were made to look artificial. Look at the careful pairing of red and yellow tulips.

And how about that topiary? Emphasizing the fire hydrant instead of trying to hide it is an especially nice touch.
Comments (1)

May 14, 2007
I bought four of the most perfect white ceramic coffee mugs at David Mellor’s in London, had friends tote them back to the States when I couldn’t fit them into my luggage, used them for two years, and then a couple of months ago one of them disappeared. I looked everywhere, asked everyone who had been in the house, even searched my next-door neighbor’s kitchen where I might have taken it for tea. How could a mug just disappear? Then, the other day at my desk while talking to Scott on the phone, I swiveled around and saw it sitting in plain sight on top of a tub of gesso on a shelf in my studio. 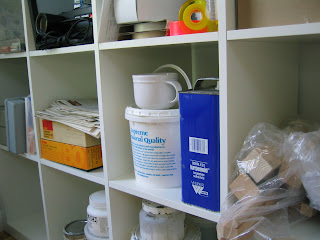 I’m an artist. Aren’t I supposed to be observant?

Or how about this? I’m sitting at the counter in the brand-new kitchen of the house I’ve lived in for now, oh, at least half a year, on the phone again, when I happen to look at the bank of drawers across from me and notice—for the first time—that the handles are asymmetrical. Instead of placing them in even rows, the carpenter put the handles on the wider middle drawers higher than those on the smaller drawers next to them. Could it really be that he did that? And could it really be that I never saw it before? It makes no sense. But what really makes no sense is that this thing I didn’t even notice for six months is now driving me crazy.

The human propensity to see what we expect to see rather than what’s really there is supposedly a normal phenomenon and even has a name: “inattentional blindness.” Magicians depend on it. But when I find it in myself it’s disorienting, as if the world I think I’m in, and the one I’m really in are alternate universes.

In the art world there’s “inattentional blindness” in that people often don’t experience more than what they think they’re supposed to, based on what they’ve been told the art is about. Whenever I go to a museum I’m struck by how many more people are gathered around the wall text than the art itself. When they finally turn to the art, viewing it has turned into a game (like the inverse of “What’s Wrong With this Picture?”) of finding in it what the writer of the wall text was talking about. Any possibility of another experience is lost.
My favorite example of art world “inattentional blindness”—or maybe just fatheadedness—has to do with an altercation I had once with another visitor in James Turrell’s roofless room at PS1-MoMA. Entitled Meeting, the installation was inspired by Turrell’s lifelong involvement with the Quaker faith, and if you’ve visited it you know that you sit on benches around the perimeter to take in the changing sky exposed above. There’s no placard that says you shouldn’t talk, but for most people, even children, the place itself inspires a blissful silence that’s punctuated only by incongruous city sounds from the street you’ve forgotten is below. That day was no different. The fifteen or so visitors were hushed—except for the guy next to me who could not stop whispering to his companion. Psssz, psssz, psssz. It was making me nuts. What could be so important that he had to talk about it just then? Psssz, psssz, psssz. I was annoyed, first with him and then with myself for being annoyed. Psssz, psssz, psssz. Unable to take it anymore I tapped him on the knee and whispered as gently as I could, “This piece is about silence.” He shut up for the next twenty minutes or so but must have been seething the whole time because as he got up to leave he leaned over me and hissed, “This piece isn’t about silence, it’s about light.” 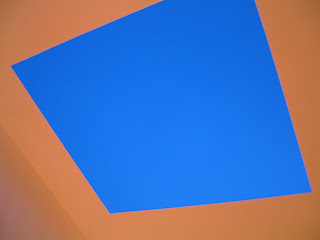