Yesterday I went to Wave Hill in Riverdale in the Bronx for the opening of a group exhibition with a Thoreau theme that included my friend, Richard Torchia. I couldn’t believe I hadn't been aware of this spot so close to the city, with its soaring views of the Hudson and Palisades, where the buildings, grounds and gardens are so extraordinarily beautiful that—unless extremely carefully considered and well-placed—any attempts at artifying it come off as superfluous and jarring, like bad jewelry with an otherwise perfect outfit.

Richard's piece was deep in the woods, a simple structure the size and shape of Thoreau's cabin at Walden Pond. Inside the darkened room, on opposite walls where the two windows would have been, camera obscura lenses reflected the gently waving leafy branches outside. Watching it was mesmerizing—even more so, I was aware, than the actual scene outdoors. It reminded me of the time my sons were small and we went to a performance at the Goodman Theater in Chicago where they began fidget and we left early. Walking through the lobby, however, they became transfixed in front of a video monitor—a simultaneous broadcast of the play that had so bored them in the theater minutes before. At the time I chalked it up to the power of television but now—after recalling that, in general, TV was not a big attraction for them—I think the video may have focused the action so that they could get more of a handle on it. It made me think about art as a mediation of experience and how, by eliminating the distractions, it can often act as a felicitous narrowing--rather than a broadening--of vision, a chance to see the world through someone else’s eyes.

Then Richard took me on a circuitous route into the woods to show me this single stone embedded in the path, which he told me was left over from an installation by Robert Irwin: 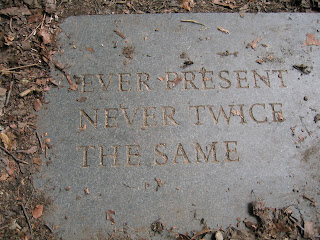 http://leonemorricone.blogspot.com
Beautiful - I love you. Thanks for such a tiny escape to a splendid place.
This is such a great place. It has been one year since I have been. Your blog has just reminded me.