I finished writing my Louise Nevelson article and it’s as if I’ve just recovered from a disease, although not necessarily an unpleasant one. When I write about artists in depth I read and think about them so intensely that they become part of my life, part of me. Especially if I’ve done an interview and then listen to the tapes, after which their voices drone on in my head. Robert Irwin was once stuck there for a year, and it was pretty hard to take. This time, with Louise, I felt as if she entered my DNA—but then she would; we all know she wasn’t shy. Also there was, I discovered, a strange synchronicity to the chronology of our lives: we have the same birthday, we both married at 19 and led lives as suburban housewives for 11 years until separating from our husbands, and started the serious study of art late, at the age of 30.

Perhaps because I now identify with Nevelson—but more so because I’ve gained so much artistically from knowledge of her work—I was annoyed when, in my research, I read Mario Naves’s review (The New York Observer, May 14th) of the her Jewish Museum retrospective (on view until September 16th) which begins:

Upon opening the catalog for The Sculpture of Louise Nevelson: Constructing a Legend....you're immediately confronted with a photo of the artist in early middle age, her features retouched to emphasize the lines in her face. 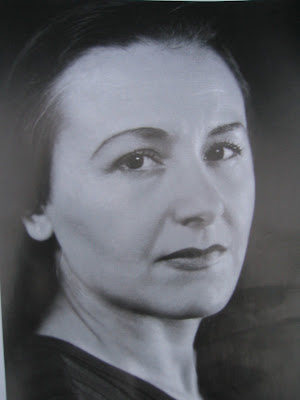 This is quite a stretch to make a case for image-building. When I contacted the museum, I learned the photograph was retouched, but by whom and for what reason is not known, and whether or not it emphasizes the lines in Nevelson’s face is a matter of opinion. It’s possible, they say, that the retouching could have been done to add shadow and contrast to areas that were washed out by the lighting. There’s no date on the photo, but in it Nevelson appears to be in her middle-forties and the style of make-up would also indicate that it was taken in the 1940s, at least twenty years before she became a public figure. Naves says:

She looks to the viewer unsmiling and with unflinching self-possession.

Oooh self-possession! Bad. Do we complain or even comment that Picasso was self-possessed and didn't make cute for the camera? And that Mondrian! Always so fucking serious!

More portraits follow in chronological order, bearing witness to Nevelson’s transformation from working artist, dressed in a white wool sweater and cap, to a creature with (to put it mildly) a distinct sense of fashion. In the last photograph, Robert Mapplethorpe’s portrait of the 87-year-old Nevelson, she’s as haughty and garish as Norma Desmond in Sunset Boulevard.

Naves makes it seem as if Nevelson was unwittingly making herself ridiculous, where if you compare the film still of Norma Desmond here with the Mapplethorpe here, it seems more likely that the similarlity was intended, and that Mapplethorpe and Nevelson were having fun riffing on a classic image.

Unlike Gloria Swanson’s faded-movie queen character, Nevelson (1899-1988) was very much self-aware. She knew that cultivating an image, however contrived or flamboyant, would earn her recognition. Her regal bearing, bandanas, dramatic gestures and spidery false eyelashes created an identifiable persona: the Pharonic Grande Dame of Sculpture. Nevelson was, in her own way, as P.R.-savvy as Salvador Dali or Liberace.

So being "very much self-aware" is all that separates Nevelson from Norma Desmond? How about that Norma Desmond was pathetic, desperate and needy, a woman who gave a party to which no one came, while Nevelson was celebrated, in her power? Everyone wanted to be at her party. At the time of the Mapplethorpe photo, Nevelson was the epitome of a satisfied, fully-realized woman. And garish? Whatever degree of garish she was, it landed her on the Best-Dressed List. And then the times, the seventies and eighties, were pretty garish all around. I wonder what Mario Naves was wearing back then, when he was in his teens and twenties. Button-downs and Oxfords? It was an era when people, especially artists, used style to express themselves, unlike today when art is big business and everyone’s cowed into Prada.

Okay, on to the idea that Nevelson’s look was a P.R. ploy. If it was such a great scheme, then how come it took so long—like 20 to 30 years—to take effect? Those who have done their homework, who’ve read Laurie Lisle’s wonderful biography Louise Nevelson: A Passionate Life know that Nevelson’s style was with her from the beginning, a source of discomfort for her husband in her pre-art years. Lisle writes: “While Charles dressed conservatively, Louise liked to create flamboyant outfits for herself, like a dress decorated with a dickie made from a wedding napkin. He often insisted she return purchased outfits that he disliked, and he began to be embarrassed to walk down the street with her.”

Charles: Oh my God, Louise, are you going to go out looking like that?

Louise: Don’t worry, Chuckie, I know what I’m doing. When I leave you I’m going to study art, and in 50 years I’ll be famous and this is the look that’s going to put me over.

Anyway, what’s wrong with wanting attention and going about it in an artful way? Nevelson was never anything but elegant. And being a tall, dark woman with excellent bearing and an acute awareness of her body allowed her to pull almost anything off. The day I went to interview her, a few months before she died at 89, she was wearing an impeccable man-tailored suit of crisp blue ikot fabric (a Japanese-ish cotten with a thread-dyed geometric pattern), what looked like men’s black patent leather wing-tip lace-up shoes, and a fabulous fur coat. Then and there I decided that older women who go the fluffy, ultra-feminine route look like men in drag, and that when I’m eighty I’m going to have men’s suits made for me, just like Louise.

But back to Naves:

The girded accumulations of individual components are artful rather than lively. Overall, they’re rather boring. Butting a dozen or so boxes up against or on top of each other results not in great complexity, but homogeneity.

The artist, Willie Cole, seen in a video at the end of the exhibition, speaks of Nevelson’s art in terms of “embalming.” Inadvertently, but with devastating precision, Mr. Cole hits the black and rusty nail on the head. Nevelson’s pieces aren’t memento mort, they’re just dead.

Their handsomeness is derived from their inertia. Nowhere is this clearer than Mrs. N’s Palace (1964-77), a shack-like enclosure that’s less Temple of Dendur than house of horrors. Nevelson’s gift for juxtaposition is undone by her theatricality. Here she replaces stoic spectacle with outright hokum. It’s funereal bombast with mood lighting—a sad and all-but-laughable achievement.

Not for nothing is Nevelson hailed as a progenitor of a numb-to-its core movement like minimalism, or the didactic excesses of most installation art. Nevelson’s sculpture ultimately privileges the artist’s prerogatives over art’s vitality. We’re left with monuments of personality rather than homages to life. The latter can be picked out here and there, and to impressive effect. Don’t fool yourself, though. Nevelson the Legend wins out over Nevelson the Artist. It’s a disheartening denouement.

I agree with Naves about Mrs. N’s Palace, although I find the use of the word “shack,” which implies something crude, in disrepair, or hastily thrown-together, inappropriate. I try not, however, to evaluate artists on the basis of their least successful work (instead of the "homages to life...that can be picked out here and there, and to impressive effect") and wonder why he didn’t mention the other room-size piece, Dawn’s Wedding Feast, which happens to be white. And there’s a contradiction here—Naves admits Nevelson is “hailed as a progenitor” yet insists she made her reputation on the basis of her persona.

Note to women artists: Don’t be too minimal; don’t be too theatrical. Don't let too much personality show in your work. Make sure that you smile a lot, act conservatively, dress conservatively, and, above all, don’t be old. I guess Nevelson should have gotten Scaasi, her favorite couturier, to design her a burka.

why think so much about what mario naves thinks?

he always writes with a bitter and petty undertone - almost as if he is jealous of true artists
I agree, it's kind of silly. And such an easy target. However I wrote it because I think many people read as thoughtlessly as other people write, and calling them on it may help to reduce the b.s. in the collective consciousness.

But mostly I did it because it was fun.
Thanks for doing this. Art criticism should be picked apart and examined closely. Maybe if this sort of thing happens more often art criticism will improve. Right now, most of it is pretty awful.
Thank you! There will be more...watch out for my next post about Anne Truitt.
Well done! I have my own laughs every time I think of my grandmother. Strange that I only found your article now, September 25, 2010. Critics? eh? EVERYBODY'S a critic. Personally I LOVE my sister Neith's work and think everybody should get some. I have my own thoughts comparing Neith and Louise' work but would love to see somebody like you consider the comparison and see if we agree.

Elsbeth Nevelson
Yes, recently the Louise Nevelson DNA has taken hold in me and so I loved all this commentary. She was a tireless self promotor and her personality loomed large. I do not consider her work worthy of all the grandiose praise quite frankly and yet, Neith's art touches me. I thought when reading her biography that she spoke esoterica but on an intellectual level, her tone didactic and superior. I find her posing and costuming mannered and distracting. I would feel this about a man as well. It is one thing to wear chinese robes and another to wear 2 layers of mink eyelashes and too much makeup so that this becomes the subject rather than the art. It is the egoism that embarrasses and her need to relegate all her work to the heavenly rhelms. It is odd to
hear mention of her as an easy target...if
you spend some time on the web looking up information about Louise
Nevelson, most of it is repetitive
and unenlighted....she's the greatest sculptor of the 20th century....well, repeat that a few times and it becomes internet fact
and thus a world view. That said, I am inspired by Louise to make an assemblage in green to herald my hope for Spring. And she does touch on very wonderful advice about the need to protect one's vision and stay true to oneself. Thanks Louise.