Everyone says the print media is suffering from competition with the Internet, and I agree, not for the reasons usually cited but, compared with the Internet where you're in control of content, magazines are depressing—calculated to make readers feel inadequate in ways that only retail therapy can alleviate, thereby selling ads. Vogue makes me feel I’m not young or thin enough, Vanity Fair that I’m not rich or fucked up enough, and New York that I’m not New York-y enough (have you been to all the new tapas bars? well I have, nyah nyah). Then a friend gave me an old copy (Nov. ’07) of Shambhala Sun magazine, and that made me feel even worse because if I, a meditator from way back, haven’t attained the inner peace Shambhala Sun is promulgating, I can’t blame it on circumstance: it’s totally my fault. Obviously I’m not trying hard enough—or I’m trying too hard not to try. Either way…

BUT (surprise, surprise!) Shambhala Sun has ads for things that can make it all better, which made me realize that anything can be commodified, even doing nothing.

So I could buy incense, spend $99 to $149 on a meditation timer, take any number of expensive workshops or maybe what I need is a buckwheat-filled meditation cushion with a memory foam insert (I did not make this up)—price undisclosed. Then there’s a series of articles about people who are just too good to be true: so calm, realized and serene that they’re totally boring and by comparison, despite meditation, my life seems complex, convoluted, and so full of drama that it could be the next installment of "Gossip Girl"—and it’s all my fault. One of the articles was a profile of Leonard Cohen, a 40-year student of Buddhist meditation. He used to be screwed up but now, older and wiser, “nothing unsettles him” and he’s worried that his songs are now “too cheerful.” I wonder if he has memory foam. 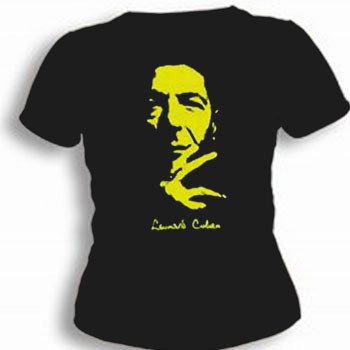 I can SO go you one better; I once dated a sociopathic Buddhist monk who lived at the same monastery as Leonard Cohen. It's the most Serious, Uncorrupted, Ascetic and, as far as I can tell, militaristically sadistic Zen monastery in the country.

Hey, and if you want to seriously commodify your enlightenment process, try getting an advanced degree from the California Institute of Integral Studies. It's wicked expensive, teaches you no marketable skills, and they recommend that you 'scale back your standard of living' so that you can afford to absorb their enlightened perspective.

Where do I sign up?
I absolutely loved Leonard Cohen....until I heard his music. It was the idea of Leonard Cohen I was in love with- some out there ARTIST who all the cool people I admired were into. John Zorn is another one.
Pretty sweet that Enlightenment might be had for the cost of a buckwheat cushion with a "memory foam insert" (WTF?!) and some incense that was probably made by a six year old kid in India or Nepal. As long as it doesn't involve listening to a Leonard Cohen or John Zorn cd I'm down.
Carol, I've been thinking about your words "with the Internet where you're in control of content, magazines are depressing—calculated to make readers feel inadequate in ways that only retail therapy can alleviate, thereby selling ads" and I was wondering if you could expand on that, particularly how blogs/web media don't feed into our insecurities. It's an interesting concept I haven't heard much about in reference to the differences between print & web media.

About Leonard Cohen, as a fellow Canadian he makes me hurl...he's just too depressing for my taste (but that's just me :) ).
Thanks, Brack, for setting me straight about the meditation cushion. How silly of me to niggle over the price of a fast-track ticket to Enlightenment.
Poor Leonard probably gives that monastery all manner of money. And in return, his "master" probably pours him more sake.

I feel sympathy, but then I, uh, wrote a poem dedicated to the man, so I'm clearly not an impartial witness.
Of course, Web communities can make one feel old as well. Conversely, magazines can make one feel in control, since one can scan a whole bunch of articles quickly. Clicking through the Times in the morning online can be a real chore. As for Leonard Cohen, if Buddhism requires a nasal monotone, a black wardrobe, and lyrics conveying anger and suicidal impulses, I have a lingering suspicion that this is so only in portions of North America.
Great post. Proof there are no sacred cows in the artvent...
Your comment, hr_g, encourages me to keep working on a post I've started about the differences between Internet and print publishing. I don't think print is dead at all, just needs to be rethought.
40 years with a sore bottom and he still forgot to pray for the angles
The way I see it, if grain hulls were good enough for Dogen's ass, they're better than good enough for mine.

Print needs to be seriously rethought, and someone will rethink it once the online publications finally eat their advertising revenue once and for all. I think that's still a fair way off, though.