I hardly ever recall my dreams, but when I do they’re almost always the same. Except for the ones where I’m in a public place without my clothes, or suddenly remember I have a kitten or baby I’ve forgotten to take care of (they’re always okay, I just feel this terrible guilt), all of my dreams are travel dreams where I can’t get somewhere, can’t find my luggage, etc. I thought when that dream finally came true that I wouldn’t have it anymore but that didn’t happen (yes, I really was in the airport outside Reykjavik at 6:30 a.m., unable to find Einar’s phone number or my luggage, running across the tundra after the only bus of the day that was leaving without me…). In last night’s dream I was lurching from car to car on a futuristic train trying to find my luggage, clutching a gigantic zip-lock plastic bag stuffed with hundreds of tiny bottles of toiletries to my chest. The “stewardesses,” all in a gaggle talking about their dates of the night before, were no help. At one point I found myself walking through the empty observation car as we were passing Niagara Falls and next to the rushing water was a giant screen duplicating the scene, as if it were a rock concert. All of this was no doubt triggered by reading an article in an old (April 28) TIME magazine, about Richard Branson and his revolutionary plans for Virgin Airlines (where I’m a regular), one of which is to end the “Sisyphean tyranny of the cart” by offering choices (which you pay for, of course) from a computer screen, brought to you whenever you want. Wow, I think, what a great idea, until I realize that if I did get that plastic-wrapped $12 turkey sandwich, most likely it wouldn’t be appetizing enough to eat, so what to do with it? Perhaps use it as a neck support as I nap, hoping I won’t dream.

P.S. The Iceland story ended happily. Einar, sensing something was up, rang me, I found my luggage, and the beautiful blond bus dispatcher took it upon herself to arrange for a driver to take me to Einar’s outpost, about 25 minutes away (cost: $16)—where breakfast was waiting. It was almost worth it to find out how caring people could be to a stranded stranger in a far-flung place. 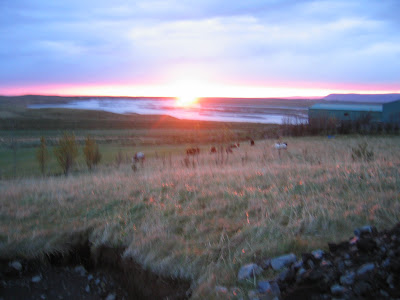 I scared my dogs with the laughter regarding dreaming of big ziplock bags of toiletry items. The screen in the rail car mimicking the scene outside is a very cool image, though, I think.