I spent yesterday trying to write a blog post about art (art? what’s that?) when I, like everyone else, was obsessed with what Sarah Palin’s candidacy has revealed about this country. I’m wondering why (except for a mention in a column by Maureen Dowd, who happened to be in Alaska when it took place), the allegedly biggest protest rally in Alaskan history was not covered in the mainstream press. 1500 people showing up in Anchorage (pop.128,000) is, percentage-wise, like over 700,00 people gathering in New York City (pop. 8 million plus). The rally was totally grassroots, dreamed up by two women over coffee, and despite some rather extreme attempts at sabotage, succeeded beyond their wildest expectations. You can read about it here and here. I hope (if people find out about it--pass it on!) it will spur similar rallies in cities the press can’t ignore. I’m poised to go to Washington, and have been ruminating on possible acronyms such a movement could inspire, such as Feminist Women Against Palin, or FWAP!

Given Palin's supposed popularity rating in Alaska, it's also enlightening to read the editorials in The Anchorage Daily News: Questions for Palin and one suggesting that the "Governor takes executive privilege too far."

Meanwhile, cleaning and reorganizing my painting storage this summer rekindled my interest in making more “journal” paintings—a series I did for ten years where I noted, in oil paint on canvas, words and symbols that represented the emotions and events of my daily life. The paintings were born of frustration—with my painting (what was I doing and why was I doing it? who was I doing it for?) and with a life circumscribed by illness, work, and no time for a studio practice—even if I wanted one, which I wasn’t sure I did. Eight years before I had “dropped out” at a moment of success, made the decision not to show my work, and from then on when I did do something in the studio, I did my best to make it unsalable—by painting over old paintings or using those crappy pre-stretched canvases (a decision I regret, because I like those paintings now). I also gave much of it away. When I did my first journal painting, choosing to use personal details as content was also an act born of perversity—who would care? (And ten years after that, when the art world was awash in intimate minutiae, seemed like a good time to give the journal paintings up). 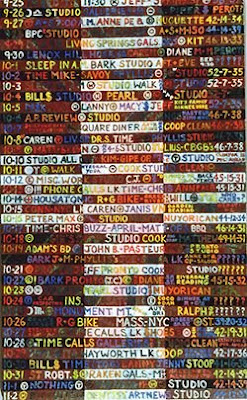 My decision now to make another journal painting has turned out to be weirdly synchronistic. I started the first with an old painting, 80” x 48,” which I ruled off in two-inch segments so that each represented a day, and added up to the exactly 40 days (a Biblical number) between my birthday and Election Day, 1992—when Bill Clinton became president, winning out over George H. W. Bush and Ross Perot. In each two-inch strip I noted what I did that day (on my birthday the art director at TIME, for whom I was working, took me to lunch at the Palio Bar—those were the days!—and son Matt took me to see a private concert by Soul Asylum, remember them?) and I ended it with figures derived from the election polls. That was, of course, before cell phones, when the polls were pretty accurate. The numbers started out Clinton 57-Bush 37 and ended with Clinton 44-Perot 17-Bush 39, while Clinton won 43-17-37. This time there are 42 days between my birthday and the election so I have to reconfigure a bit. Also the polls are now wildly inaccurate—but at least it gives me something to do other than bite my nails.

Carol,
After seeing you at the”Bloggers Conference” I googled your painting. Out of the different series on line, I was especially attracted to the “Journal” pieces. I’m a big fan of people like Alfred Jensen and John J. O’Conner who, like you, encode space with color and language, so keep it up.

Your situation regarding the cheep canvases is very timely. Crappy, pathetic and abject materials are all the rage now. Examples of this were spread throughout the recent Biennial and the “Unmonumental” show at the New. Seems they embody some aspect of our current cultural state. Patch ‘em with ducktape.
Thanks, James! The decision to use cheap materials should always be a decision, not a cop-out.

At one school where I guest-taught senior undergrads, I was the first teacher they'd had who insisted they learn how to stretch their own canvases. "You'll never know what you can do until you use professional materials," I said--to which they responded, "But we're not professionals, we're students." And don't get me started on Winton oil paint.