I arrived home Friday night to a New York that was one giant Halloween party, with exceptionally warm weather that led to a certain sartorial minimalism; I’m guessing there’s not a single pair of fishnet hose left to buy in the city. By contrast Chelsea yesterday was like a ghost town. The galleries were manned by skeleton crews, and I wasn’t surprised when one dealer admitted to me that nothing was selling. In my overfilled inbox, however, was a press release from Sperone Westwater announcing their move in December to a nine-story, 20,000 SF. Norman Foster-designed gallery one block north of the New Museum on the Bowery, so someone’s optimistic.

I’d hoped that my ten days away just before the election would provide some much-needed respite from agonizing over it every single moment, but instead I found the Europeans equally obsessed. To judge by the amount of coverage the election is getting in the British press, you’d think it was a local event. And the international members of Olafur Eliasson’s staff, who I joined for lunch in his Berlin studio, were as up-to-date on Joe the Plumber and the price of Sarah Palin’s wardrobe as anyone. It feels as if the whole world is holding its breath.

Our purpose in going to Olafur’s studio was to shoot footage for a short documentary focusing on his collaboration with mathematician, architect, and all-around visionary Einar Thorsteinn, who previously worked with Buckminster Fuller and Linus Pauling. Olafur and Einar have been working together since they met in Iceland 12 years ago, when Olafur, then 29, was looking for someone to help him build a geodesic dome-type structure, and one project led to another. The two-hour shoot couldn’t have gone better. We had some anxiety when, in the morning, city workers suddenly appeared with deafeningly noisy equipment to spend several hours pounding gravel into the cobblestone courtyard outside, but miraculously they finished just as we were about begin. I barely had to refer to my list of prepared questions; Olafur and Einar addressed each point in order as methodically as if they’d been clued in by a secret spy (I believe in never sharing questions with interviewees in advance, lest I get a canned response). 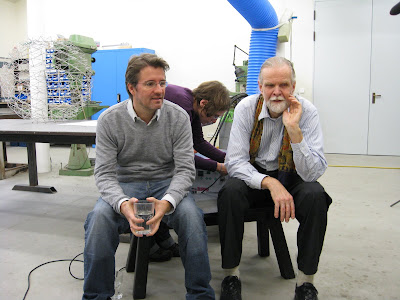 Despite requests by collectors and institutions to buy individual models and even the whole, Olafur and Einar’s Model Room, much of which was at PS 1 for the MoMA show, has been reinstalled in the conference room of the new studio and spills out into the hallway, where it continues to grow and serve as inspiration for new projects. The attitude toward it is hardly precious—this is a workshop, Einar said—and he told us, while we were filming it, to feel free to move things around as we liked. While Terry and Erica were setting up, I had time to spend with these quirky geometric gems, which led me to think about the relationship between harmony and chaos and how, to be fully engaging, an artwork requires certain degrees of each. It was also energizing to be around the 30 or 40 members of Olafur’s busy team, who he sees as working with rather than for him, acknowledged co-creators, an attitude which results in a palpable enthusiasm all around. He also feeds them well. Every day the cook (working in the studio kitchen, which is not walled off, so that she’s part of the creative bustle around her) prepares a simple, healthy lunch—the day I was there it was pumpkin risotto with a green salad and great bread. The food is is laid out buffet style and eaten on long trestle tables in the cavernous dining area, which has walls and high ceilings faced with the remnants of beautiful old tiles and tall, arched windows. As well as making sure everyone gets proper nutrition, the communal meal has its practical reasons for being—no one wastes time going out for food, and it provides a daily opportunity for cross-communication that would be unlikely otherwise.

The 30,000 SF building, which the studio only recently moved in to, is a red brick fortress-like former brewery, and when Einar told me about it last year, referring to it as Olafur’s “castle in the center of Berlin,” I didn’t know that he was being so literal. The first floor is the kitchen, workshop and showroom (in the old studio, one worker told me, there was no room even to set things up and see how they looked), the second is the conference room and studio, and the top floor will house a school for 15-20 students (best described in this That experience, coupled with a visit to Einar and Manuela’s home in the Berlin outskirts, a house which nearly bursts with the results of their combined creativity (the subject of the next Art Vent House Report), made me want to just come home and work. The best possible outcome.
I didn’t see much to mention in London, other than Frank Gehry’s pavilion at the Serpentine, which looked as if he’d handed the project over to an intern. Or perhaps it would have been better if he had. Terry deemed it “over-built and under-designed.” While the press release described it as “seemingly random,” I—a Gehry fan in general—couldn’t discern any over-arching concept, but saw it as an example of chaos that could have benefited from a little mediating harmony. I think we’ve had enough random for one century, thank you. While we were there an English girl and her Indian boy friend—art students, no doubt—were in the middle of an argument about their relationship when the guy became distracted and, looking over at the pavilion, muttered, “That thing is a pile of shit.” 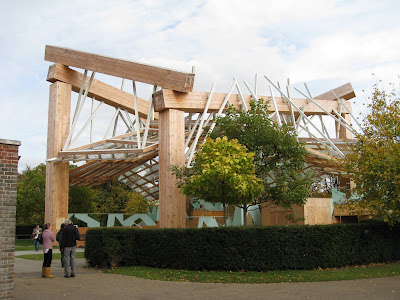 I did, however, get to spend quality time with the Upholstery Eater and am pleased to report that she’s thriving despite (or maybe because of) her inherited proclivity.

What a pleasure to read this account of OE's big studio doings.....reads like a utopian idea from a bygone era? Where is the corruption, greed, manipulation, decline in quality, etc.... Refreshing! (Can I work there?)
XOAP
Wonderful post! I feel as if I had been on the trip with you. I adore the working model of a building with studio and living space, not to mention loving the individual models that I don't want any one to have unless I can have one..
Adore the scatalogical quote from the quarreling couple. And from the photo, I'd have to agree.