How do I love my iPod? Let me count the ways. And I’m grateful for my GPS, too. Even though its performance is uneven, I cannot forget that it has extracted me more than once from driving hell (otherwise known as Boston). But yesterday they both let me down. At the same time. It was a long drive through the frozen tundra of upper Vermont to the Vermont Studio Center (VSC) in Johnson, which is even north of Burlington, if that’s possible, when my iPod began playing music from a band I swear I’ve never heard (lyrics: “Shut your mouth. Shut your mouth. Put your head back in the clouds and shut your mouth”—sound familiar to anyone?), while the readout said something else entirely. It was supposedly on shuffle and it would say it was playing, say, Air or Kasabian, when it was really just this one band, and not a great one at that. I might have written before about the time my iPod insisted on playing nothing but Oasis, the entire repertoire, until it got a grip on itself and went back to normal, but to think that a machine could share one of my obsessions only made me feel more affectionately toward it. This new quirk, however, just seemed perverse. Especially since, at the same time, my GPS, which had successfully gotten me through the twists and turns of Rutland, was now telling me in no uncertain terms to STAY RIGHT, TURN RIGHT!!! on Route 109 when I thought I should keep going on Route 100. Really, having a GPS is like being married (“I SAID TURN RIGHT, DAMMIT!”) except it doesn’t get upset if I stop at a red light I could have gotten through on the yellow, or choose a parking spot that’s not the absolute closest one to where we’re going. Anyway, I was 99% certain I was headed in the right direction—the analog technology I consulted (a map) confirmed it, plus my car has a built-in compass, plus I’d been there before—but nagging doubt stayed with me as I put fifty plus miles between me and Route 109, fifty plus miles of winding mountain roads, icy uninhabited flats and signs that said things like, “Moose crossing next 8 miles.” I went through the town of “Irasville” (surely I’d remember that name if I’d been there before, wouldn’t I?), and past The Church of the Crucified One (now there’s a place that could use a corporate sponsored name-change). Not to speak of a chocolate shop that turned out to be an outlet for “seconds” and “over-runs”—I’m addicted to chocolate, but not that addicted. It was only when I went through Stowe, and Route 100 met Route 15 at a restaurant called “Wok ‘n Roll,” (which I did remember), that I knew I was home free. Meanwhile my iPod…well, I haven’t turned it on yet this morning but I’m hoping it’s come to its senses.

Sculptor Judith Shea, who I know from when we were Senior Critics at Penn together, gave the lecture here at VSC last night and I give mine tonight. The temperature on this sunny morning is –5 degrees, and since the kitchen is out of herbal tea, I’m drinking simply hot water, the way the Chinese do, and it’s an extremely effective warmer-upper. Tomorrow I begin five days of studio visits, every half hour or so, from 8:30 to noon. 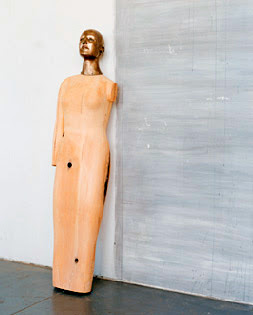 You think your iPod and GPS went on the fritz by accident?

You think "church of the crucified one" is an accident...

Welcome to the Mad River Valley..
Mom, that would be"World Shut Your Mouth" by Julian Cope....
Thanks! I didn't know I had it, plus I couldn't even find out as long as the iPod was telling me it was Radiohead. However I'm pleased to report that my iPod has made a rapid recovery and is doing very well (knock on wood), Mad River Valley or no.
Gorgeous piece by Judith Shea- I met her in Poland, good to see her work-