Art Vent House Report #5: Easter, for the second year in a row, was celebrated at Kurt Andernach’s home, which he calls Somersault House, on the Athens/Catskill, NY border, so deep in the woods that it takes a high clearance vehicle, preferably with all-wheel drive, and a certain amount of intestinal fortitude to negotiate the seemingly endless narrow dirt roads that lead to it. Each time I go there (once, scarily, by myself, near midnight on a dark, snowy New Year’s Eve), I wonder if I’m really going to find it, and if not, how I’m going to get out.
Even if you didn’t know Kurt was German, the siting of his cottage in the forest would make you think of Hansel and Gretel, but then you go inside and the fairy tale feeling is complete. Both rustic and elegant, it could be Little Red Riding Hood’s grandmother’s house—provided Grandma had exquisite taste and a penchant for Biedermeier furniture.

But finding such a house in the middle of the Catskill woods isn’t the only incongruity. The other is that Kurt is an architect, a designer of chic store interiors (such as those for Diane von Furstenberg and my favorite department store, Bon Marche in Paris) and blindingly white loft-like spaces. Obviously he has range. How many modernist architects do you know who proudly display a cuckoo clock? 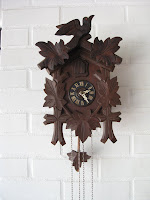 One of the many distinctive aspects of Kurt’s house is that there are no screens—“How European,” a friend said. Yeah, except northern Europe doesn’t have insects (a Swiss friend once told me it was because they wouldn’t allow them) and this is New York State, where mosquitoes rule. Kurt, however, is uniquely oblivious—or impervious—to mosquitoes, and one summer evening I ate in his dining room largely untouched—even though the room was buzzing with them—because his dog, sitting next to me on the bench, was incredibly efficient in snapping the insects out of the air with his mouth.

The massive, elaborate antique furniture is from his family, and when I asked Kurt how he got it into the house he said, “Oh, it was easy. It came from Europe in a container, which was left on the main road, and I rented a U-Haul…” Clearly what’s easy for Kurt would be challenging for a normal person—he's also moved hundreds of rocks from the woods to form patios and walkways around his house. I hope to do a summer update on the extensively gardened exterior which, when everything is in bloom, is as magical as the interior.

A corner of the kitchen, set for Easter brunch:

A corner of the dining room:

Kurt now splits his time between his architectural practice and a storefront in on Main Street in Catskill, where he makes indoor/outdoor furniture to be marketed under the name Somersaultwoods. Solidly handcrafted in rustic Bavarian style without glue or screws—all joints are made by hand—his focus is on green technology for the materials and finishes. 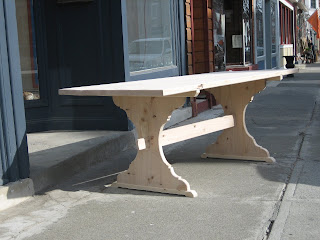 What a fantastically small world. Kurt's birthday is in my old birthday book, so every now and then I google him and this time I found this.
You and I are friends w/ Scott Cole, who was at Picotte with me; Kurt I met in Chicago in 1989, I think in a YHA. We toured Oak Park's Frank Lloyd Wright's houses one weekend. I remember his room jam full of furniture and paintings he had had shipped over :) When I saw the rabbits I remembered there were a couple of things he collected. Ha! What nice memories.
Janey